The conservators saw it first. Over the years I’ve been lucky to work on archaeological projects with conservation teams on site–they pick up the pieces when we reveal something that is too delicate or too sensitive for archaeologists to move without risk of further damaging the object. They conserve paintings, wood, metal, pottery, bone, and can fix your site flip-flops if they snap. They have tiny tools and lots of glue–they’re our miracle workers.

One of them will be called in to meticulously scrape off the handiwork of this elderly parishioner, spending countless hours removing flecks of the offending paint. So, yeah, they saw this and cringed. Good luck to the conservator that has to tackle this one. Oof.

The second person referencing this link thought it was hilarious. I admit, when I clicked on the link and saw the photo, I laughed too, and then shook my head. It was reported on Boing Boing as “Fresco Restored” and the comments section is split: about a third of the commenters are horrified, with one stating that “I feel like absolutely everyone would be better off if news of this hadn’t spread very far. I know I’m not better off for knowing.” The majority think that the “restoration” is hilarious.

Is it the rendition of a bizarre Jesus with his black eyes and strange tongue that is funny? Or that an elderly lady did it? I am not arguing that it isn’t funny, I was laughing too, but why? A recent story on NPR described anthropologist Robert Lynch who studies humor but who also does stand-up comedy. Roughly, “you laugh when a joke resonates with your inner values and beliefs.” The “restoration” struck a chord with some of us. I’m not sure what this chord was–the destruction of cultural heritage usually doesn’t elicit a chuckle. I think this reaction calls into question what we think is cultural heritage and what is the appropriate treatment of such.

Finally, I was wondering if the conservators needed to be called in at all. From what little I know about it, the “restoration” was an act of devotion; the restored Jesus is a very personal Jesus, with bare reference to the original. If it offends, it might be easier to primer over the whole thing, project an image of the original at the right scale, and then repaint it entirely. They were planning to repair and repaint the painting anyway, perhaps we should leave this lady’s Jesus as part of the palimpsest of devotion.

For your secret (or not-so-secret) inner processualist:

You too can own an expression of your extra-somatic means of adaptation!  Y’know, that’s really the biggest problem with post-processualists–poor font choice.

Here’s a bit of light-hearted entertainment for those suffering from the blues on Valentine’s Day…or the rest of us who are just motoring through the semester:

A good reason to keep your contexts clear, reported by the Moore Group: 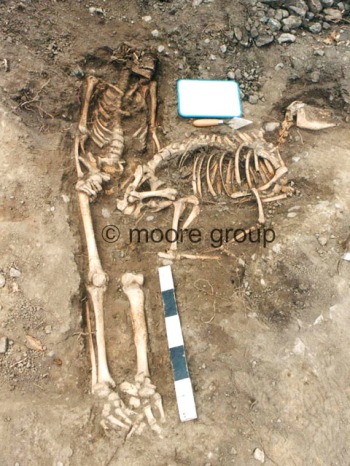 And a bit of humor in the lolcats genre: