Last February Doug Bailey emailed me (and many others) to see if we’d participate in a unique experiment: he would mail us artifacts from the excavations that preceded the recent construction of San Francisco’s Trans Bay Transit Center that were deemed unworthy of archival. His prompt:

In accepting the invitation, you commit to repurpose (disassemble, take apart, grind up) the artefacts that you receive so that they become the raw materials with which you will make creative work. There are no other limitations, instructions, or guidelines, beyond the suggestion that the work you make should engage contemporary social or political issues and debates. Engagement may relate to San Francisco and its current energies (e.g., the tech revolution, disenfranchisement, home/houselessness). Engagement may flow from your personal reaction to your assemblage of artefacts, or to your own personal, professional, or local political experiences, desires, and frustrations.

A few months later, I received a box with some disintegrating leather inside. I put it on my desk and thought about it for a while. I’ve been teaching filmmaking to Master’s students for a couple of years now, but most of my time behind a camera has been spent making promotional videos for York in my publicity administrative role. I really wanted to engage creatively with film again and this was the perfect chance.

Ineligible urges contributors not to think of the material as archaeological, as artefactual, or as historic.

Well, damn. So over the summer I put the shoe in peoples’ hands and filmed it. Though these people happen to be archaeologists, I think I was able to draw out different encounters with materiality, beauty, and our association/disassociation with the lives of our objects. To be honest, I think I failed in that part of the prompt, but these are the stories we wanted to tell.

I was prompted to write an artist statement, and I wrote this clumsy thing:

As an anarchist, a mother, an archaeologist, I’m deeply concerned with making kin through the investigation and care of objects, places, and people. Finding a politics of joy and intimacy, and building things together as a way to resist Empire. In this short film I gave an alienated object, a child’s shoe, to my kin, the caretakers of the discarded to understand and reanimate this object, even as it disintegrated in our hands.

I was delighted when it was selected to be shown at the Ineligible exhibition curated by Doug Bailey and Sara Navarro at the International Museum of Contemporary Sculpture in Santo Tirso, Portugal. The exhibition opens March 6, 2020.

I was recommended EUScreen at a meeting, but I’ve only just now had time to check it out. I was happily surprised at the huge amount of archaeology videos they have.

A simple search for archaeology yields 167 films! Here are a few:

Title: The Ancient Hydraulis
Year: 2002
Length: 9.5 minutes
Made by: European Cultural Centre of Delphi
Genre: phenomenological/expository
Authors: Directed by Maria Hatzimihali-Papaliou, who was born in Greece and is part of the New Greek Cinema movement. She has made several documentaries highlighting social issues and disability in addition to her documentaries about ancient Greece. A notable film that combines these topics is People of Peace, a film that juxtaposes excerpts from ancient Greek writers and images of 20th century conflict. Interestingly, the credits list both the filmmakers and the “scientific team” behind the movie.

Oh god, she thinks, not another archaeology video with pan-flutey music. Seriously, can’t we think of anything better?

I fully admit that I had no idea what a hydraulis was before the viewing of this video. It is pretty damn cool.

The narrator quotes from primary sources to tell us the power of music in Greek society, how the symphony created by the hydraulis captivated an entire congress. The original 3rd century instrument was powered by a hydraulic air pressure stabilizer that was eventually replaced by bellows, turning the hydraulis into a wind instrument.

The video streaming kept breaking, so I got to hear this dude sing at least a dozen times. I switched to watching the video on Daily Motion:

We switch to expository mode next, when we learn more about an archaeologist finding the remains of a hydraulis and reconstructing it. The hydraulis eventually turns into our more familiar pipe organ, adopted and then developed by the Catholic church.

There are a few overviews of the site of Dion, during which we learn about the archaeologist Dimitrios Panternalis who found the hydraulis at Dion and is now the president of the New Acropolis Museum. It is a little unfortunate that they don’t have any images of the process of construction, so we continue to see scenic Dion.

The Ancient Hydraulis is a mildly interesting video about a fun bit of experimental archaeology that could have been about half as long. If you are wildly into the Greeks, Classical Archaeology, Experimental Archaeology, or like to hear a yodeling dude, this video is for you. 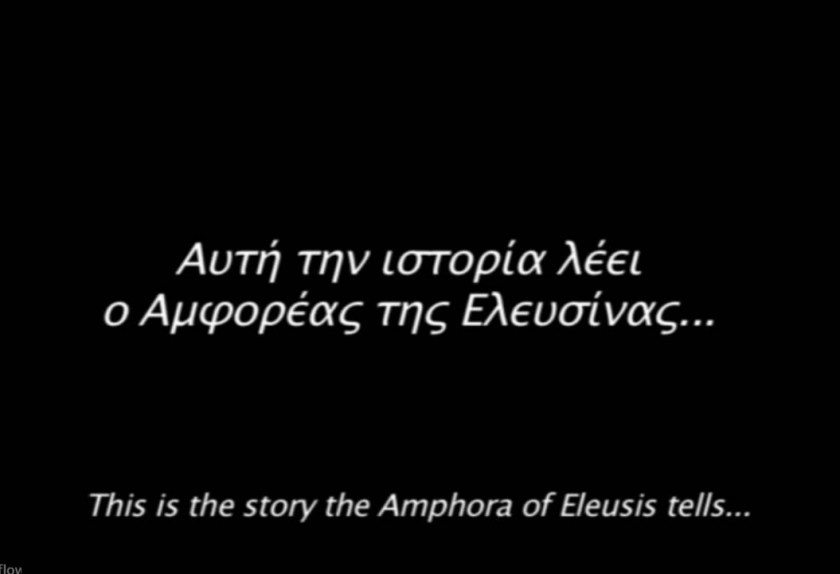 A delightful short video subtitled in Greek and English that takes the viewer through the story of Odysseus and the Cyclops as if it were being told to a child using the decorated amphora of Eleusis as a story book.

The soundtrack is performed in part with a Cretan lyre and compliments the subject–light and repetitive without being grating. There are some slightly cheesy Adobe After Effects and a random and jarring animation, but they don’t detract too much from the film.

A simple, creative exploration of an artifact that shows the potential for archaeology films to go beyond a simple expository framework. I was delighted by the presentation of the amphora and then the progression of the film to show a mother and child looking at the artifact in a museum. There’s even a slightly macabre twist near the end!

Absolutely one to show archaeology, conservation & museum students as an example of how to make a simple, engaging film using a single artifact.

(I had to skip the  previous film in the sequence, The Akha Way, as I had trouble streaming it. I’ll come back to it.)

I’m going to watch and review all of the Archaeology Channel films. Probably. There’s over 170 of them, so it’s a crazy idea. But why not?

For the inaugural film:

Authors: Not to be mistaken for the archaeologist Kenneth W. Russell who died tragically in Jordan, Kenneth L. Russell was the founder of the Educational Video Network and a Professor of Education at Sam Houston State University. Marjorie Haw Russell was a photographer and artist. Together they coauthored several educational videos about the ancient world.

Review: The opening made me immediately nostalgic for all the documentaries we had to watch in school. The reedy opening music evokes sadness, and a drowsiness with which we view the surrounding landscape. Most of the shots are long, landscape, no humans visible. Several Mycenean strongholds glide in and out of the screen until we get to, of course, The Acropolis.

The music picks up when we get to the first humans shown–why it’s the Pelasgians, of course! They’re a wallpainting of some dudes with weird eyes carrying fishes. Apparently they were “deeply concerned with vegetation and fertility cults.” Aren’t we all?

After touching on the important people in Greek history (mostly gods and kings), we follow the subsequent history of the Acropolis. I was excited when the Persians busted things up in 480 BC, but not much came of it, except for some column bases now placed in the walls.

Overall, the historical record is not questioned; this is a very art historical approach to classical archaeology. There are no revelations, archaeological investigations, or moving images, for that matter. It is a slide-show with poorly preserved image quality and a didactic voice-over.

People who grew up in the 80s or 90s may want to watch the first 30 seconds to hit a certain muddy technicolor documentary sweet spot.