In our Introduction to Archaeology classes, we give our students a choice over the site that they want to focus on for their final project.  These can run the gamut from Teotihuacan to the Gault Site in Texas.  Students gather materials about the site and present this information to the whole class, and the final exam covers details from these presentations.  The success of these presentations varies widely, generally according to how interested the students become in the topic, and if they can maintain group coherence.  Each year that I’ve offered the choice of Manzanar as one of the sites, the undergraduates who chose the site become extraordinarily excited and interested in the place.  Even though most of them grew up in California, few have learned about the Japanese American Internment camps within their own state, each of which has an extensive historical record to draw upon. 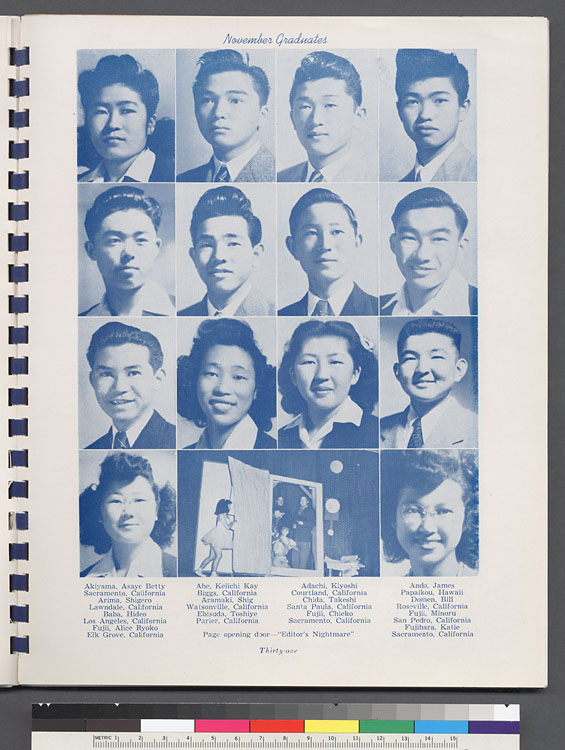 So, imagine my surprise and keen interest when I ran across the Internment Camp Yearbook scans on boingboing.  Aquila, published by the Tri-State High School in 1944, documents a year in the life of internees in Tule Lake War Relocation Center in Newell, California.  It’s hard to equate these smiling teens, slick with hair pomade and starched collars with prison camps.  But look under their names–it’s where they lived before the war.  Where they were taken from, after being forced to sell or give away their homes, possessions, and businesses.  Only 60 years ago, in the United States of America.

The students get this though.  In their presentations they talk about the oral histories, examine the archaeological evidence against the documentary evidence, lay out a plan for future interpretation of the site.  And then, sometimes, they do a bit more.  Unprompted by me, the last part of the group presentation from 2007 drew parallels between the treatment of a perceived enemy population during WWII and the treatment of Muslims in America, post 9-11.  The last slide was of Guantánamo Bay.

Needless to say, I’ll be using this yearbook next time around.

Scans from “Aquila“, in the Guy & Marguerite Cook Niesei Collection at the University of the Pacific.

For the next three weeks I’m helping to teach a class at the Presidio of San Francisco on digital documentation, cultural heritage, and interpretive trails.  It’s an intensive course, 8+ hour days for the undergraduates and more like 12-13 hour days for me.  For the first day, I had the students create memory maps using flickr and google maps to teach them how to use the tools, but also to teach them about free-associative narratives as a part of placemaking.  It worked well as an exercise, and it was interesting to see the different scales that the students used for their own maps.  I made one a couple of years ago ago about living in New Orleans, but I felt like I wanted to update it, so I made another one from Austin, linked above.

Good fun, but I’m ready to have my hands in the dirt again!