Back in 2012, Dan and I worked at the fantastic 100 Minories project with L-P Archaeology. They’re some of my favorite people, so I was sad that I was not able to work with them on the excavation phase of the project, which is currently in full swing. I have two blog posts about the evaluation stage, wherein archaeologists dug to 7m deep, punching test pits through the thick London stratigraphy:

They have their own, very nice project website now, take a gander:

And they’ve featured some of the building recording photography that Dan and I did inside the old Navigation School, a 1960s Brutalist structure: Check out a few of the rest of the images HERE. I swear we used a scale in most of them, they just picked the ones without!

As I mentioned in the last post, we are digging deep at 100 Minories. We finished up last week at a depth of around 7.5 meters beneath the ground surface. Working this deep is extremely dangerous and we are given a long brief about all the equipment required, called an induction.  We are in a testing phase, basically exploring the depth of the deposits while evaluating our needs for post-excavation specialists (pottery, animal bone, etc) so that L – P Archaeology knows how how much to charge for excavating the entire area. Evaluating trenches are used sparingly as they are understood to potentially interfere with the broader archaeological sequence. Preservation by record–fully excavating and recording all of the deposits impacted by the building–is standard operation in the City of London (different from just London London). London archaeologists consider these 2x2m test trenches as inferior for interpretation and while they are recorded meticulously, they are used to evaluate the presence or absence of cultural remains and are not used as a primary excavation technique as they are in the States. Basically, yes, there were Romans here, no we cannot characterize their lifeways from digging a phone booth through their deposits.

For example, there was some debate over whether to call this feature that Neralie is cleaning brick paving or a garden path:

While the pit is roughly 2x2m Neralie is standing in a 1x1m that was excavated in the corner to determine a further sequence–we were not allowed to remove architecture in this case as the site may not go to full excavation…in theory, at least. You’ll also notice that she has 2m of concrete above her, and no shoring, as the concrete was determined to be stable. She does have a superstructure over the pit to ensure that nobody falls in:

In the 1×1 she is down about 1.20m from the bottom of the concrete, at that point shoring was installed.

Checking out these test trenches was an interesting return to squares after digging in open plan for many seasons. We do not collect all of the finds, just a sample to characterize each context, again to determine which specialists we’ll need to look at the materials from the site. The top trench has reached what passes for “natural” here, river terraced gravels, but it can still contain “monkey rocks”–the rather unique term that London archaeologists use for mesolithic artifacts. Another term that I’ve only heard here is “plus.” I’ve drawn them plenty, the little plus-sign at the top of the Harris matrix that indicates surface, or no previous deposits. Here “plus” can be material remains–all of the modern intrusions that are not recorded in detail are called plus and are dug out before the matrix begins. Sorry, contemporary archaeologists! Though with 7m of strat to record, the “messed-about” nature of the surface deposits in a place that is as heavily occupied as London, and the time/money calculation always running in the project manager’s head, I can’t find much to criticize. Criticise. Whatever. 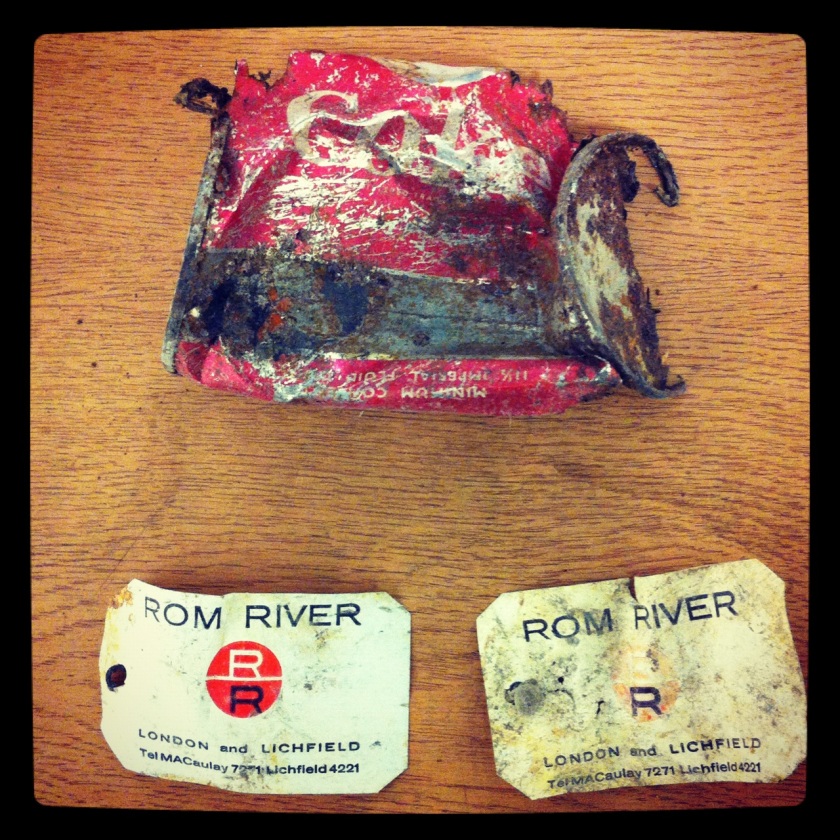 Lest you think we are entirely crassly indifferent to more modern garbage, these were saved from the fills associated with the construction of the brutalist concrete building at 100 Minories that will be destroyed before we continue work. It’s a Coke can that you have to open with one of the old can-openers and two tags that had “1961” written on the back of them. They were near some rebar found in test pit #4, and probably were attached at some point.

The evaluation trenches are closed now–we’ll move off site today and I’ll be back in California in a little more than  week’s time. I’ve enjoyed my crash course in London archaeology, and hopefully I’ll be back for more in the Spring.