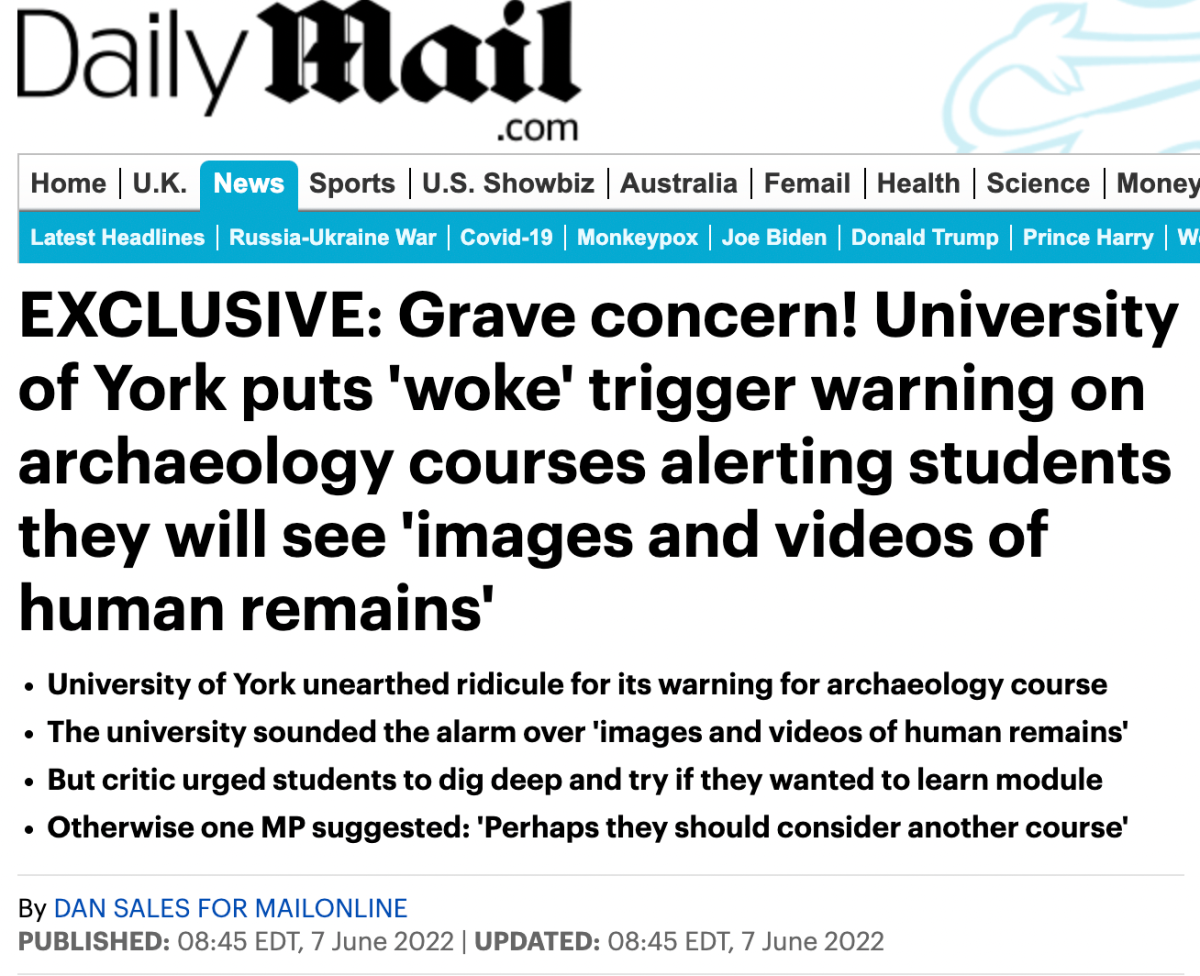 Over the last few weeks Archaeology departments have been getting Freedom of Information requests from news outlets asking about trigger warnings. On 7 June, the Daily Mail published an outrage-bait article naming me and describing my Communicating Archaeology module, in that it has a content warning on it. I became aware of this through my University contacting me to warn me and ask how they could support me and if they should respond.

This is a predictable and old media strategy that still somehow gets a lot of mileage. Gabriel Moshenska wrote a fantastic chapter, “Anatomy of a ‘trigger warning’ scandal” when he was dragged for having a warning on his Conflict Archaeology module in 2016. He added this warning as he receives students on his course with personal experiences of warfare:

Students who might have expected sessions on identifying regimental buttons and measuring musket balls were being shown magnified images of machete wounds and technical drawings of mass graves full of children – and it seemed only fair and reasonable to let them know.

Yes, this is archaeology too. The Mail on Sunday, the “sister paper” of the Daily Mail found this warning and contacted him. As he describes in this chapter, he replied in good faith, only to find that his reasonable account was presented alongside “pre-prepared outrage” from (gasp) a right-wing ideologue with an agenda. The coverage rocketed from there, from The Times, to Spiked, to Breitbart. He received hate mail and abusive messages on social media, some of them explicitly antisemitic. This discussion was also taken up by Tony Pollard with regard to trigger warnings and teaching about war graves.

Moshenska notes the immense hatred expressed not only toward “woke” academics (yawn, we are used to it) but worryingly also towards our “fragile” “snowflake” students who just can’t hack it, apparently. I found that this mirrored the hundreds and hundreds of comments under the news stories, students called “jelly babies” and the like. If anything, the students might need protection from the incredible hatred heaped upon them by their parents and grandparents. Intergenerational bigotry is so pointless and cruel.

The support from my University and my Department was very good–perhaps informed from previous incidents. My department also has a social media contingency plan in place for when things go wrong. I immediately locked and then deleted my main social media presence–Twitter. I’m not on Facebook and my Instagram has been locked forever. Like Gabe’s experience, the article has snowballed into ridiculous dimensions and miscellaneous venues, on the television and radio alongside print media. Unlike Gabe’s experience, I was only named in the Daily Mail instance, and I wonder if some of this has been because I followed Gabe’s advice: resist any urges to respond.

It’s frustrating to keep silent against such misuse, but when I was contacted by other journalists to follow up I didn’t respond and I asked my University and Department not to respond as well. Subsequently my name was left out of their stories. As an academic you really want to set the record straight, to potentially educate the journalist, or perhaps the public, but it doesn’t work that way. With outrage bait articles they are not looking for a reasoned response. They don’t want you to convince them, they want you to be the dumb woke academic mollycoddling our fragile students. They want column inches and maybe a photo of you for their right wing audience to mock. Give them nothing. I’m writing this during the furore, but will likely post it only after things have died down.

I’ve also been contacted by a few (wonderful) archaeology groups who want to publish a response. I have been trying to discourage these, to wait the news cycle out and let the culture war die out. Later responses are great and are really appreciated, but I also hope people are coming together to figure out how to better support people within their organizations when it happens the next time. I do appreciate the colleagues and institutions who, in their responses, have not named me. Thank you.

That brings me to some take-aways, for people impacted and their communities:

Anyway, it is ironic that I received this treatment from the Communicating Archaeology module, as it is primarily about critically examining and creating media about archaeology. It’s essentially created a perfect case study for the module. So it goes.

5 thoughts on “The Outrage Machine”