Ahh, 360! I’ve been wanting to play around with using 360 video in archaeology since seeing this video of the Hajj in 360–something that I will never be able to experience:

I also use this excellent example from the Crossrail Excavations for teaching and I love pointing out the various “actors” in the scene, the manager, the person recording, all these people standing over the two archaeologists digging up a plague pit:

Great use of diegetic sound, placement of camera, but the “actors” are oddly silent, as though waiting for the pesky camera to turn off before getting back into the ever-present trench chat. Maybe Crossrail thought it would be disrespectful to have discussion intrude into the excavation of a plague pit.

360 video would generally fall into what I’d call the phenomenological genre of archaeological filmmaking, granting the viewer the gaze of an archaeologist. The ability to pan around the scene provides a small modicum of agency to the viewer, a sense of being there in a way that eludes still photography and fixed-frame videography. There’s also the matter of surveillance and the panopticon (mentioned in the article above), so beware of abuse, obviously.

As the guest of the Elizabeth Castle Project in Jersey I took advantage of being there by trying out the 360 video camera (Insta360 One X) we have in the department. I knew there would be a learning curve, but it was great fun trying to figure out a new workflow, how to presence the archaeology, where to put the camera.

I was not very successful, particularly compared to the Crossrail video but I’ve learned a lot for the next go-round.

I’d like to be able to fit it in with still footage, add audio tracks, and just generally mess around with it a bit more, but for now, it’s a fantastic piece of kit for fieldwork. I’m also intrigued by composing the story of an archaeological excavation with a 360 camera. Would you narrate to the camera? Compose the shots to draw the eye to various elements within the scene? Have various archaeologist-“actors” yelling out for attention? Can someone buy me out for a year or two so I can play around with this damn thing??

The outtakes are pretty fabulously weird as well. I love that the device makes itself invisible…that’s a whole ‘nother discussion. 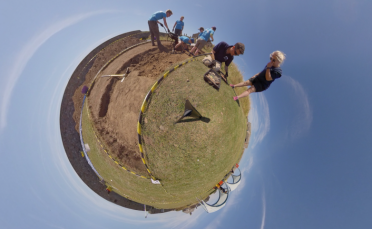