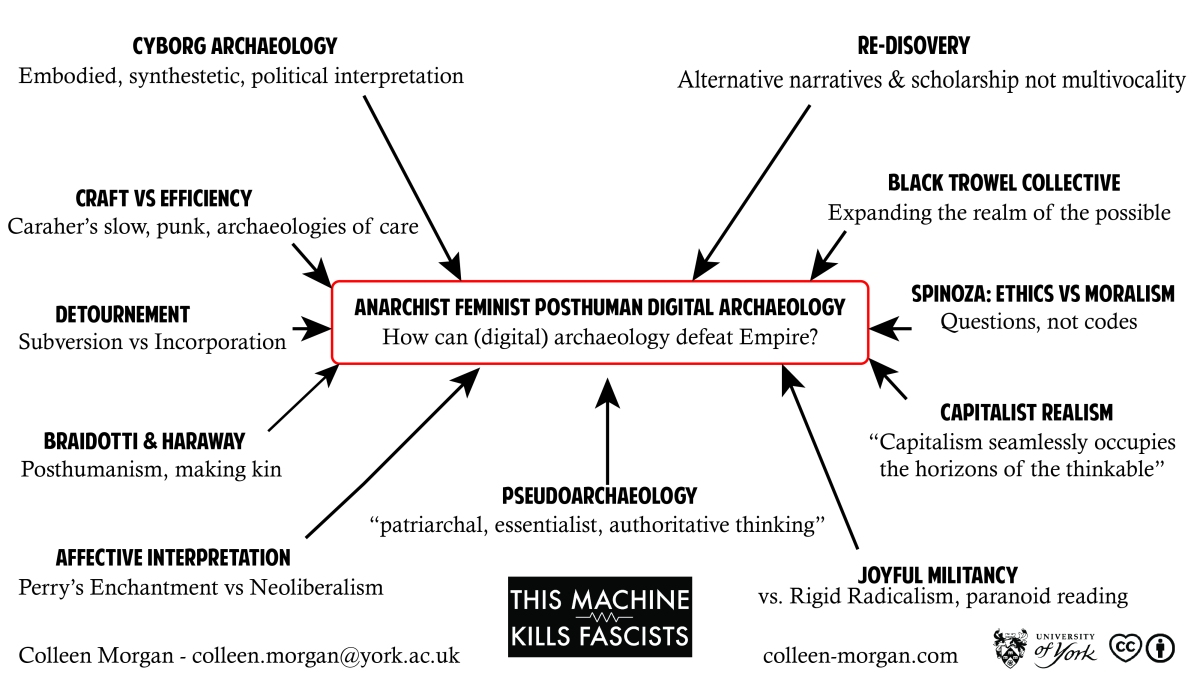 I was grateful to be invited to the Computer Applications and Quantitative Methods in Archaeology (CAA 2019) conference in Kraków, Poland this year. I participated in the Our Knowledge is all over the place! roundtable organized by Paul Reilly, Stephen Stead and John Pouncett. We had one slide and five minutes in which to discuss a bespoke “knowledge map” that captured our collective disciplinary knowledge.

I’m still digesting the discussion afterwards and my fellow panelists’ perspectives. I was pretty nervous ahead of time as I had basically made a very personal knowledge map about how I framed my own practice and it felt very revealing. I drew heavily from Mark Fisher’s Capitalist Realism and carla bergman and Nick Montgomery’s Joyful Militancy, which have been profoundly impactful in my current practice. I’ve had the kernels of these ideas for a while (see my graduation commencement speech) but the books have given me some of the language and tools to precisely address and actualize this thinking. Empire. Paranoid Reading. Alternatives, not multivocality.

I was also very happy to hear from my fellow panelists: Paul Reilly, Pricilla Ulguim, Tuna Kalayci, Katherie Cook, Lorna Richardson, Daria Hookk (et al), John Pouncett, In-Hwa Choi and Natalia Botica (et al). We all had very different takes on the concept of knowledge maps and it was illuminating to hear from everyone.

I made a loose script, which I loosely adhered to for my five minutes–if you are interested, find it below.

END_OF_DOCUMENT_TOKEN_TO_BE_REPLACED

At York, all lecturers are encouraged to complete teacher training to receive their Postgraduate Certificate in Academic Practice (PGCAP). I’ve been teaching in higher ed since 2005, but appreciated the training as it was specific to the UK system. One of our tasks was an original research project on an aspect of teaching that we are interested in. I decided to evaluate the first-year undergraduate Archaeology curriculum for inclusion to better understand how the canon of literature was formed in Archaeology.

What resulted was a small project that falls somewhere between a proper paper and a blog post. I went through and made spreadsheets of all of the assigned reading at York. From the paper:

To address the need to decolonise the curriculum in archaeology, I assessed the reading lists assigned to first-year undergraduates within the Department of Archaeology at the University of York, noting two metrics: 1) Perceived Gender, and 2) Black, Asian, and Minority Ethnic (BAME) (see appendix 1). At times these metrics were difficult to determine. Assigning perceived identities was an uncomfortable exercise, but there was not time within the assessment to email each of the authors individually and ask how they should be identified. Some archaeological reports did not attribute authorship. Additionally, I only recorded data regarding the first three authors; in the case of scientific journal articles, I recorded data regarding the first/corresponding author and the last author, as this is generally the lead investigator of the article and the senior author/supervisor, respectively. After gathering these metrics on spreadsheets I assessed each of the courses independently for their inclusion of diverse voices. Finally, I compared this data to data gathered from an Introduction to Archaeology reading list assigned to first-year undergraduates at the Institute of Archaeology at UCL. By doing this I hoped to gain a more general idea of practice within the field, particularly as UCL is the home institution for the ​Why is My Curriculum White​ movement.

I was hoping to use the Gender Balance Assessment Tool, as it measures both gender balance and the inclusion of BAME (for USA readers, this is UK-ese for Black, Asian, Minority Ethnic) authors. Unfortunately it requires the first name to be listed, which almost never happens in reading lists or bibliographic citation, so I had to pick through the lists to manually code them.

Perhaps predictably, the balance is…not so good. From the paper:

Collectively, the autumn and spring term coursework in Archaeology at York assigned reading by female first authors 22% of the time (87/308) (figure 9) and BAME authors 1.3% of the time (4/308). This compares positively to the UCL Introduction to Archaeology figures (though York is an aggregate and UCL may assign more diverse authors in additional courses) and, given more research into reading lists across the UK, might be viewed as average or even good, considering the founding of the profession.

Yet in research conducted in 2013, academic roles in archaeology are divided more evenly, 46% female and 54% male (Aitchison and Rocks-McQueen 2013). Gender parity was expected across archaeology (incorporating commercial, educational, and other sectors) in 2017-2018 and women were to be the majority of the workforce by 2022 (97) (Aitchison and Rocks-McQueen 2013). Research conducted during the same time period on publication and gender in archaeology in the United States revealed a similar gender division, 47% female and 53% male, but also showed a considerable gap in publication rates (Bardolph 2014). Out of 4,552 articles and reports from 11 peer-reviewed journals published between 1990 and 2013, 71.4% were authored by men as the first author and 28.6% by women (Bardolph 2014). A similar study has not been conducted within the UK. Out of the courses surveyed, only Introduction to Archaeological Science surpasses the 28.6% mark of scholarship authored by women, with 30.4% of the reading by women as first authors.

I’m speaking at one of York Archaeology’s Equality and Diversity meetings about the topic, and all of my colleagues that I’ve discussed it with have been interested and invested in trying to diversify the curriculum. We’re changing up several of our core reading lists this summer as well. If that goes well, I may update the paper and send it out somewhere for publication.

But for now, if you are interested, it’s a short read, hastily written:

I’ve removed the appendices as York’s reading lists aren’t public–unlike poor UCL, who get picked on for their transparency. Sorry UCL, I still love y’all.