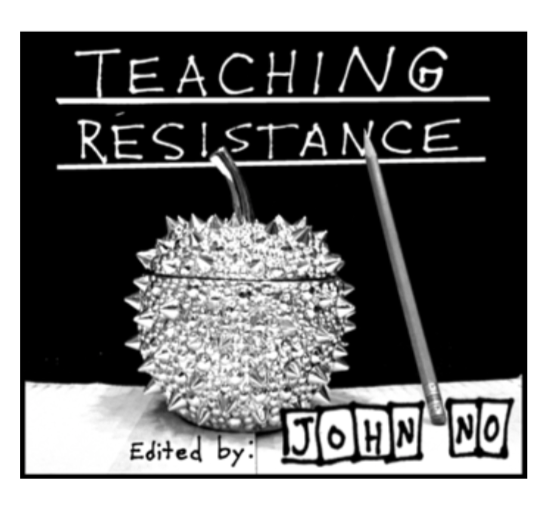 Maximum Rocknroll began in 1977 as a punk rock radio show and became a long-running zine–basically my teenage bible. In it, John No of the Fleshies and Street Eaters has been editing the Teaching Resistance column and I knew him through a class at UC Berkeley, so I thought I’d contribute. Some of it is cribbed from my Teach-Outs and the Progressive Stack blog post, but it’s considerably expanded.

I’ve posted my bit below, but John No has a great introduction to the piece so you should pick up a copy of MRR at your favorite record store, or online. Want to write your own? Email John No at teachingresistance@gmail.com.

Amidst the ongoing horrors of rising fascism in the US and Europe, the devastation of Yemen, child detentions and global environmental disaster, a strike among university lecturers in the United Kingdom seems hopelessly twee and woolly. The surface cause of the strike—fighting for our pensions—sounds downright quaint even within the UK context, but it is within a landscape of intensive, predatory neoliberalism that has been eroding the UK university system for the last 20+ years.

Finally, finally, UK academics were angry. The casualization of labor that is common in the US university system has been infiltrating the UK, making fast and destructive progress. Lecturers are under incredible pressure to recruit students to shore up budgets that have been hollowed out by the government, are evaluated by arbitrary metrics, and are under impossible workloads that led to a Cardiff University lecturer committing suicide. The accompanying pressure on students has caused an unprecedented mental health crisis; our university’s mental health clinic is completely oversubscribed and we are encouraged to become “mental health first-aiders” to try to pick up the wreckage caused by the marketization of education.

Within this context, university employers decided to end guaranteed pension benefits by tying them to the success of the market. The University and College Union took a vote on a strike, and the membership overwhelmingly went for it. So in spring of 2018, barely six months into my first “real” job as an academic, I joined a bunch of staid, slightly scared, and distracted academics out in the snow.

The strike action was a rapid education for me—though I’ve been teaching in universities since 2006, my lectureship had basically been firefighting, developing new courses, getting used to new responsibilities and occasionally seeing my almost two-year-old daughter. I didn’t really think I’d have to learn the specifics of my pension, the timeline of escalating student fees (beginning to understand why Tony Blair is so thoroughly despised), and the subtly different rules of protest and industrial action in the UK, but there we were.

I’m no stranger to protest; my mother took me to an anti-nukes rally as a child in the early 1980s, I protested the build-up to the 9/11 (forever) wars and took action as an Archaeology PhD student in Berkeley many, many, many times, as perhaps one might expect. Throughout it all, I also maintained links to punk, finding resonance in Big Daddy Soul’s (né Tim Kerr) words:

Think about the kind of revolution you want to live and work in. What do you need to know to start that revolution? Demand that your teachers teach you that.

I have also managed to argue for punk and anarchist approaches in archaeology, archaeology as a form of self-actualized labor, and as a provocative and productive counter to fast capitalism and structural violence. But I was new in the job and a bit mystified by the UK context, unsure if union stalwarts had much use for a brash American. There was a very lukewarm response to the strike among other academics, who mostly just wanted to get on with what we love doing–teaching and research. The students were angry. A consumer-model of education has been enforced by rising fees and an increased emphasis on marketability and with the strike looming they certainly were not going to get what they paid for.

Finally, inspired by anti-war and other protest teach-ins at Berkeley, I organized a series of Archaeology “teach-outs” that would not cross picket lines. It was an incredibly challenging, exhausting and harrowing experience. There were the trivial elements such as the fact that lecturers were indeed on strike. So many of them refused to open/answer their emails, and rightly so. Yet this made it extremely hard to organize, and finally I started a WhatsApp group for strike participants. This was a breach of the personal/private barriers that are meticulously maintained for many British people and I’ve been here long enough that it was very uncomfortable to intrude. I also used social media, but there was mixed uptake of that within the department, particularly among students. We didn’t have access to the main university mailing lists, so I used class rosters to contact students, some of whom complained. I got “in trouble” a few times for some of these tactics, but it was important to me that now that I had a permanent job, I was able to shield students and those on contingent contracts.

After some consideration, we decided to hold the Teach-outs in our local Archaeology pub, the Eagle and Child, who instantly declared their solidarity with us. There was plenty of room, it was close to where we were striking, and was like a home away from home for many of us. There is a long history of organizing resistance in British pubs, and we were happy to continue that tradition. Yet pubs are also potentially exclusionary to non-drinking populations (though it was not mandatory to drink) and the room we met was in the second floor of a building built in 1640, with no elevators so it was distinctly ableist. Also the Eagle and Child did not open until 11:00, an hour after the strike action was scheduled (8:30-10:00), leaving plenty of time for people to wander home, particularly as it was bitterly cold and snowing most days. It was suggested that we move the venue, but no other place was particularly satisfactory, and it was left as an imperfect solution.

Given these factors, I was afraid that our first Teach-out would find me and a handful of fellow lecturers having a lonely pint, but…we had standing room only. There was a hunger for action among students and staff that is refreshing but honestly unsurprising. There were talks from lecturers that included a thorough explanation of the strike, students-as-consumers, and I gave a talk on anarchism and archaeology. These were well received, but the most powerful and meaningful discussion came as a result of using the progressive stack.

The progressive stack is a tactic used by Occupy to forefront traditionally disenfranchised voices during group meetings. I had been thinking about ways to use it in the classroom, without much luck. The progressive stack in the context of the Teach-Out was invigorating; when I led the discussion, POC spoke before white people, LGBTQ+ people before cishets, students before lecturers, women before men…to the best of my ability, at least. It relied on my own biases and foreknowledge, so it was (deeply) imperfect, but foregrounded voices that were critical to our discussion. I had described to the group what I would be doing and moderated all of the discussion according to those terms. Lecturers who were used to being heard were taking a back seat to allow undergraduates to speak and the fierce discussion and energy that resulted was truly humbling. It was also exhausting to moderate and I found myself completely drained after each teach-out.

A veteran of the UC Berkeley teach-ins, Nancy Scheper-Hughes points out that, ironically, during these strike actions we actually do more teaching and admin than we would have done otherwise, through organized teach-outs, strategy meetings, and public outreach on the radio, print and television. While some of my colleagues were joking that they finally had time to work on that pesky research manuscript, I barely had any energy for my family after I trudged home.

The strike ran its full, exhausting course. We managed several more Teach-outs, each successful to varying degrees and we tried to expand the topics covered and increase the diversity of the teachers. The last Teach-out was dedicated to bringing actions forward to the department after the strike. Because the main thing we learned from the Teach-outs was not related to pensions, or even anarchist thought in archaeology, but solidarity, and that there were major grievances among students and staff. While we “won” the strike and made the pension managers back down, it is obvious that the larger struggle is not over.

By the end of the strike, we had the support of almost everyone in Archaeology, which gave me the courage to draft a document from these concerns. This document was edited by many other people in the department and was as close to a collective voice in academia as I’ve ever seen. It was still terrifying as a very junior member of the department to be seen as the voice of resistance, and I put a photo of my daughter on the table in front of me to give me courage to speak. I read our demands out loud in our first general meeting after the strike.

In it, we quoted from my colleague in History, Sam Wetherell, who stated:

On picket lines, in teach outs and the discussions in between I have seen, the first time ever, a vision emerge of the kind of public, democratic university I’d like to work at. Tuition fees, alienated teaching practices, casualization and REF should now all be on the table.

In the document we specifically targeted mental health, casualization, the heinous student visa and immigration situation in the UK, general governance in the department, and managerialism in the university. There were a series of break-out meetings in which these topics were discussed and we are trying to address these things to the extent that we can within the department, but it remains to be seen if greater changes will resonate through the university. Meanwhile, there are rumblings that the UK lecturers will go on strike again, this time over an inadequate pay rise. But I think we all know that we cannot merely protest when the best-off among us are targeted. We enjoyed a tremendous amount of solidarity from students and casualized staff who had the most to lose and this will be utterly squandered if we do not fight for them as well.