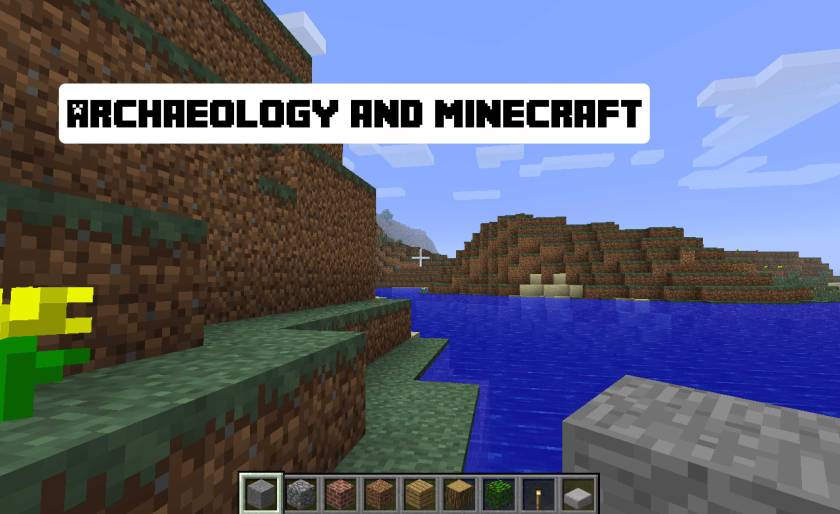 Archaeologists have been playing with Minecraft to present the past and the play around with reconstruction. Shawn Graham, as always, is at the forefront of developing archaeological landscapes in Minecraft and if you’d like to try it out, I suggest you read up on Electric Archaeology. I used his instructions to import a digital elevation model (DEM) from the famous Mesolithic site of Star Carr, currently being investigated by Nicky Milner at the University of York.

After a few tweaks, I managed to get a fairly nice, smooth landscape–Star Carr, now a lovely undulating field, was once on the edge of Lake Flixton. Organic materials such as wood preserve very well in the waterlogged peat and so they find lots of spear points, platforms and a deer frontlet or two.

Sadly we did not reconstruct the frontlets–building things in Minecraft is a lot like using Lego. Not fancy, specialist Lego like they have these days, but the basic set. So I got a reasonable model of Star Carr up and running for Yornight, which highlights European Union-funded research at York. I had a lot of help from other people in the department affiliated with the Centre for Digital Heritage.

We had several computers running on our own local server and kids (mostly boys) went pretty crazy for it. Our set up:

Well, archaeologists working at Star Car have found these circular houses with evidence of postholes, and we’ve made reconstructions based on that. But we aren’t actually sure what exactly the houses looked like. Can you help us think of different ways the houses might have looked?

That was pretty much it. A few of the kids tried to build round houses, but as you may have guessed from the Lego-ness of Minecraft, they were still pretty blocky. Some built other houses, out of brick, some built giant flaming towers, and a few somehow made guns and started shooting at each other! I’d say it was a success.

We also had a papercraft Breary Banks, another University of York excavation site, and kids colored and cut out models of the camp. I found that having a mix of tactile and digital activities was more inclusive–kids didn’t have to feel forced into doing anything they weren’t used to or were uncomfortable with.

We’re running it again for the local Young Archaeologists Club and for the upcoming Yornight, which will also feature some experimental Oculus Rift visualization. Digital shenanigans continue apace!