Admittedly, 80% of the 227 photos are of grass. Blurry, impressionistic, green. The camera was set to time lapse, taking a photo every five seconds, and most people in the Heritage & Play group had a turn. A new person at the controls, and the angry-bee-buzz of the small white drone would signal lift-off.

We all stood around it, watching it aloft, buzz around, then land. We were amateurs–this is not an effective group shot, but it’s lovely. It’s late autumn in England, the sun hangs low in the sky, prolonging the golden hour and lighting up the still-green fields. 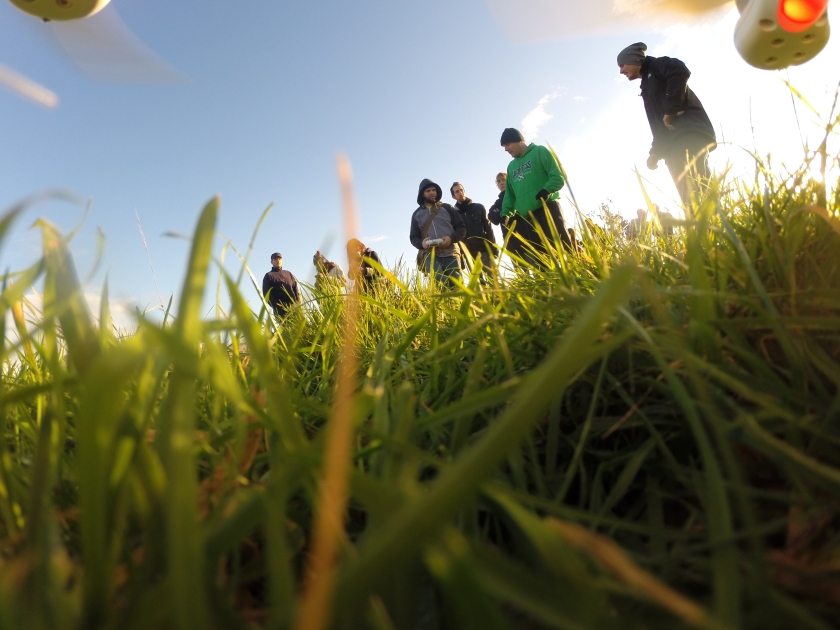 But who is the author of the photo? It was a time lapse, so was it Neil, who set the camera? Or the “pilot” of the drone? The wind played havoc with the camera gimbal, so the drone propellers show up in some of these photos, like fingers left too close to the lens.

These are the rejected shots, the extra-archival material that I’m always interested in, the visual archaeological marginalia. Drones, tied to vicious, out-of-the-blue attacks on non-combatants by the United States, are tools of surveillance, of state-crafted terror, and take lovely photos of archaeology in the English countryside. We were happy the rain lifted so we could take better photos; in Pakistan a little boy lamented the death of his 67-year-old grandmother who was killed by a drone strike while picking vegetables, “I no longer love blue skies…In fact, I now prefer gray skies. The drones do not fly when the skies are gray.”

Even unarmed, the drones are used for “weaponized photography“–there are a host of rules about where and when and why you can fly drones in the UK. Perhaps that’s why I find delight in these marginal, miscellaneous photos–they are goofy, non-standard and non-threatening, revealing an imperfect technological surrogacy. They’re accidentally lovely.