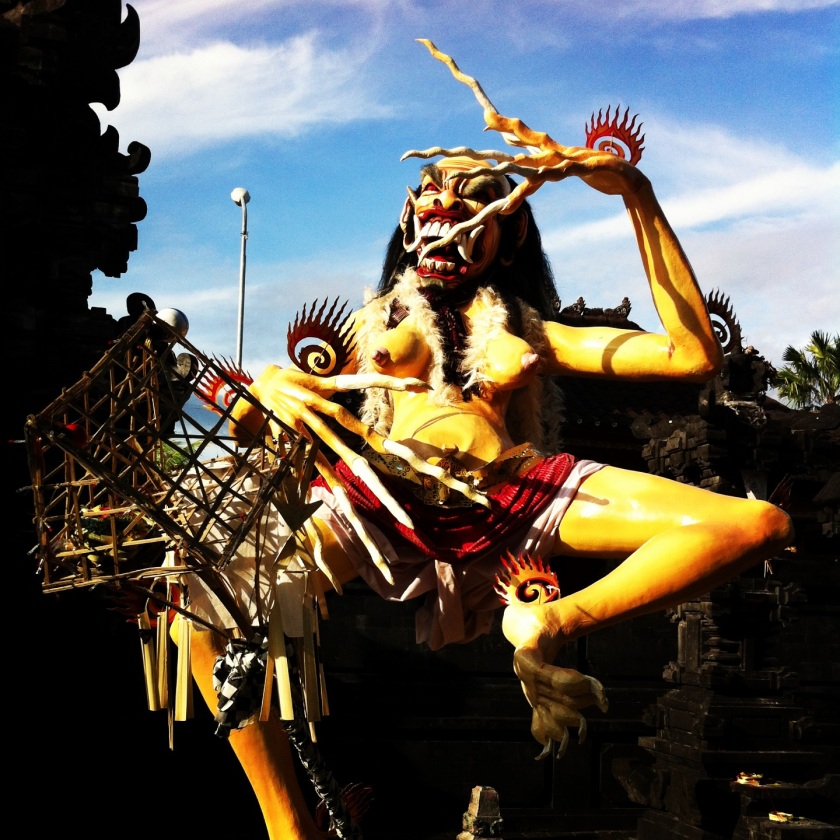 Bali is quiet today. It is Nyepi, the first day of the New Year, and it is a day of mandatory rest and meditation. We are not allowed outside our flat–if we are caught on the street we’ll be firmly escorted back inside. We must stay very quiet and not indulge in any way, or we’ll catch the attention of demons that are currently flying over Bali. If we are quiet enough they’ll shove on and not stop to wreak havoc. There are no flights in or out of Bali today. Silence. 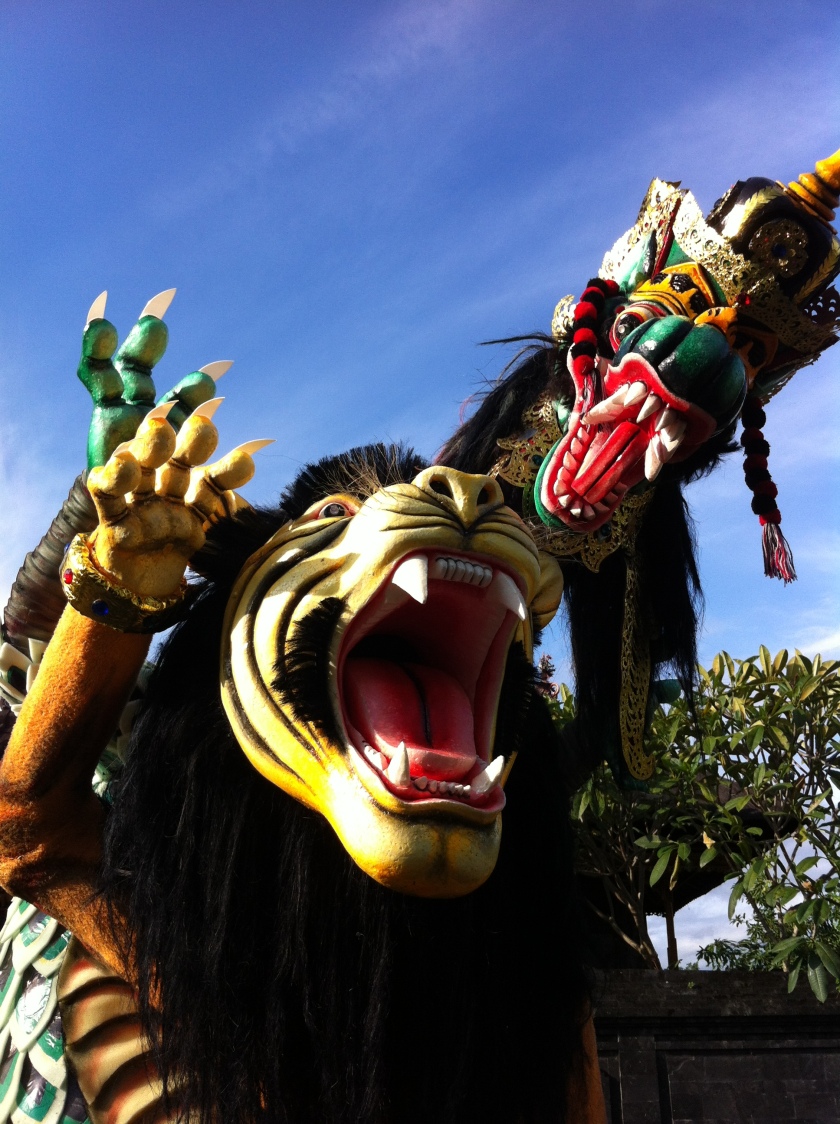 Yesterday, however, was a glorious racket as Ogoh Ogoh were paraded down the street at sunset, twirled around and “confused” at intersections, then burned down at the seaside. Over the past week we’ve been peeping inside of temples to look at the in-progress Ogoh Ogoh as they were carefully built over metal frames. As we stood watching while the young single women of the neighborhood encircled the crossroads, holding torches toward the center, and the young single men of the neighborhood paraded into the center, playing drums and melodic reong–pot-shaped gongs, the ceremony felt timeless, foreign, yet had a spiritual resonance as well. It was invented in the 1980s.

I was ambivalent when I heard of the recent manufacture of the Ogoh Ogoh parade–it seemed typical of the kind of trap you can fall into with Orientalist thinking. Bali is so mystical, the people are so nice, they value spirituality, aren’t their ancient ceremonies so quaint and romantic? Still, I love a good procession and it reminded me of the Day of the Dead, another parade that celebrates the liminal and otherworldly. 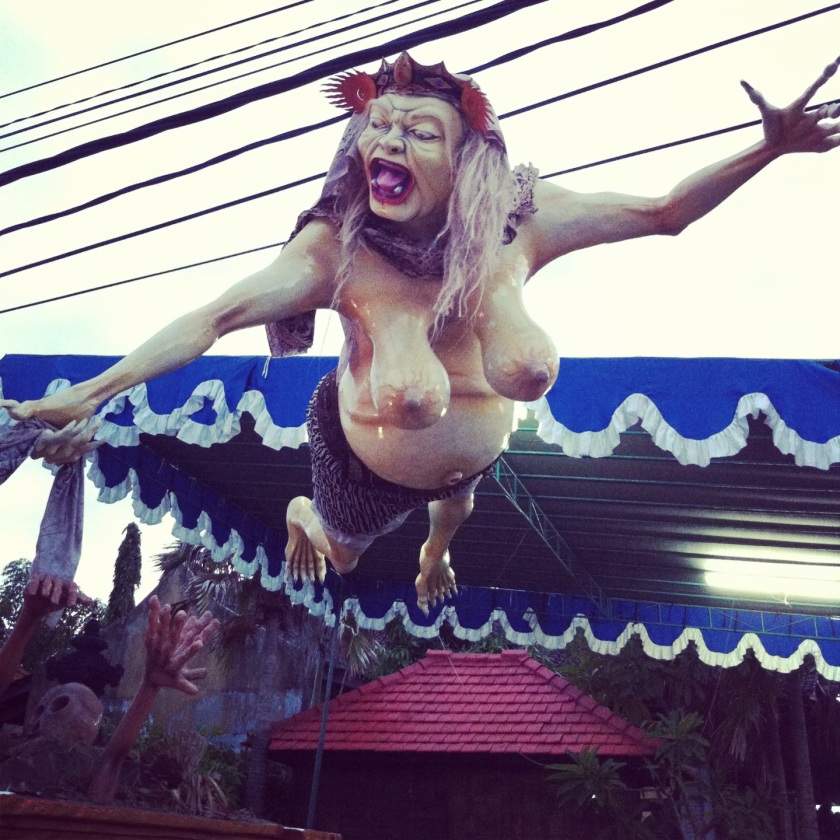 The materiality of Ogoh Ogoh is interesting; though some Ogoh Ogoh are very small, they rapidly become very elaborate, with an emphasis on the grotesque. Many go to great lengths to make the Ogoh Ogoh appear to be flying, with very little attaching the demon to the underlying bamboo structure that young men use to carry it. There are lights installed to light up their faces, and some have heavy metal music blaring from their bases. Many Ogoh Ogoh have pendulous, veiny breasts representing Rangda the demon queen. Some are painted, some are meticulously airbrushed, and I have heard that some of them are sold instead of burned at the end of the night. 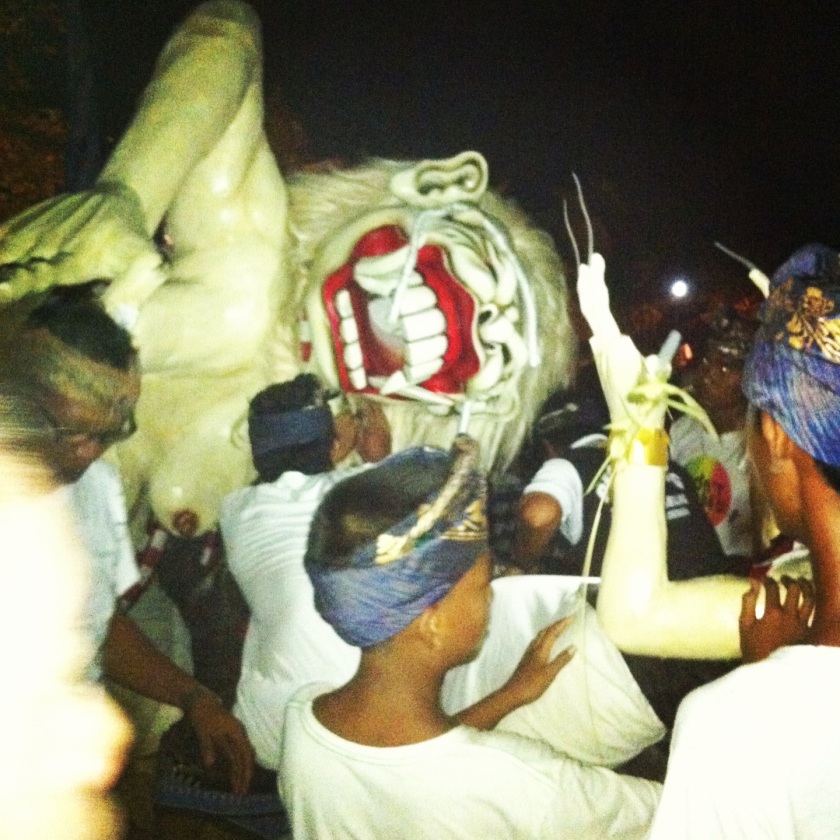 The Ogoh Ogoh and their young male handlers process to the beach, where they gleefully tear off the heads of their creations, then set fire to the demons that they carried through the streets. The Ogoh Ogoh were once made of paper mache, but now they are mostly polystyrene and the great gouts of black smoke made it impossible to breathe. The crowds dispersed before the fire had gone out.

And today, Bali is quiet.

43 thoughts on “The Recent Ancient Tradition of Ogoh Ogoh”