We got the call and three days later, we were on a plane back to Doha. So we’re back digging in Old Doha, finding remains of an older house beneath a “Heritage House” that has been preserved in the middle of an enormous construction site.

Every trench that we’ve opened has revealed either architecture or evidence of occupation, so we have a lot to work on in the next couple of weeks. There’s been a lot of “beasting”–moving lots of dirt in a rapid fashion. As most of it was construction infill, there weren’t a lot of photos or levels taken, just a lot of pick-axe and shovel handling. Exactly what I needed after being so well fed in England!

Yesterday I beasted out the rest of the construction fill from a small 4m x 3m room and so today I was rewarded with digging some archaeology, which meant a massive slow-down in pace and a lot of paperwork. I have to climb a ladder to get in and out of the trench, as the room I am digging in is about 2m below the threshold now. The whole room has been heavily invaded by the later structure and there is huge concrete, stone, and industrial epoxy mess on the east side of the trench that I try not to look at too often. It’s horrible and I don’t plan on chunking it out as it underpins the building. ugh.

But I have a couple of walls surviving and there was cut in the western bit of the room to poke at as well. It was sealed off with concrete, so I hacked away at it and found that it was filled with rocks. Lovely. About 30 cm down (.30m for nerds) there was a layer of concrete that had been smeared on to some other rocks–you could still see the finger impressions. There was a hole in the middle and that is when I realized that yes, I was digging out a toilet. 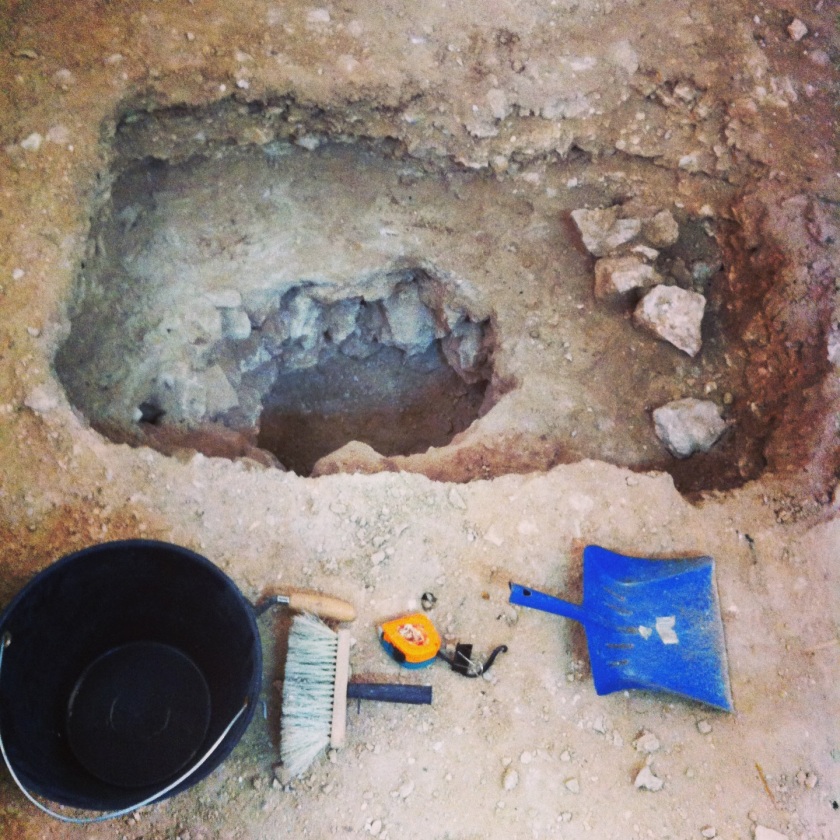 The first 20 cm of the fill had a bunch of broken tile, probably the remains of the fitting out of the bathroom. Then…yep. Yellowish-brown silty stuff. Happily I was wearing gloves.

I got about a meter into the fill then stopped, as it was too deep to dig safely. As it was, I was balancing myself on my hands awkwardly in a small rectangular cut–good thing I’ve been practicing my handstands. I finished digging the toilet (hamam) and saved all the fill for our lovely paleobotanist, Mary Anne Murray.

So now I have to finish that pesky application to the R1 University. Happy digging, y’all!

4 thoughts on “…and then there are the days that you spend with your head down a toilet.”