Working on archaeological projects is often like living in a fishbowl, and this was especially true at Çatalhöyük (Ashley 2004). When we were not being watched by the daily site visitors, there would be specialists or guards, and sometimes artists or anthropologists would wander through. This feeling of being watched was especially true when videographers or people recording sound would come on site without warning. It was disconcerting to look up and realize that you were being filmed—what was I saying? Chadwick and his colleagues “found the cameras at Çatalhöyük intrusive” (2003:103). The availability of inexpensive video tape allowed a more casual use of filming around the site, and the zoom lenses and directional microphones allowed videographers a false proximity to excavators who may or may not be aware that their actions and conversation were being captured and subsequently used without their knowledge or permission. As previously mentioned in Chapter Three, after conducting a video interview with Roddy Regan, one of the long-time archaeologists at Çatalhöyük, he gave me a direct look and said, “I’ve filmed hundreds of these things but I’ve never ever seen any of the results.”

Surveillance is deeply implicated in the lineage of new media. Lev Manovich traces the history of the computer screen from photography, through radar, and then the development of tracking software by the Semi-Automatic Ground Environment (SAGE) command center that controlled U.S. air defenses in the mid-1950s (2001). With nearly instantaneous online publication available for videos, there is the potential for embarrassing or inappropriate content to become widespread before the subject of the film can take control of the content. This behavior is relatively innocuous compared to the notorious, ubiquitous tracking of social media companies who use and sell data about your interests and your interactions with your friends (boyd 2011). Yet there are “discriminatory social implications of panopticonism” that reveal the differential social status of those under scrutiny and those who hold the cameras (Elmer 2003:232). While this has abated somewhat in light of the growing availability of video cameras, there still remains a certain wariness of archaeologists toward filmmakers.

Film is not the only means to surveil the members of excavations; mandatory site diaries or “blogs” can be framed as a reflexive measure yet without reciprocity throughout the team and an explicit assurance that they will not be used against the individuals who express their opinions, the blogs quickly become dry accounts of stratigraphy. To remedy feelings of surveillance while taking photographs and videos on site there should be a relationship of trust, that the filmmaker would not abuse the trust of the subject by videotaping while the subject was unaware of the person, nor would they publish any media without the permission of the subject. I discuss the issues of assent and Human Subjects Review in regard to video later this chapter, yet it is relevant to note that feelings of surveillance can be mitigated by the position of the filmmaker within the team. If the person is another archaeologist or a long-trusted site media expert, there is an intimacy and trust present in the media that is completely absent in media made by outsiders (see Chapter Three for discussion of this phenomenon in photography).

I always protest a little too much when I say that I’m not really all that interested in historical archaeology. It is true, the Anatolian/Aegean Neolithic still holds me firmly in thrall. It’s more that historical archaeology draws me in a little too much, I get a little too obsessive about the documentary history and the amount of crazy detail you can find about who owned the land when, what kind of forks they used, who manufactured the forks, and oh did you know that the forks were sold by a tinker in Kent at the same time? My enthusiasm for ephemera and marginalia kicks in and it all gets to be a little bit too much.

In 1707, one of the worst maritime disasters claimed famed Rear Admiral Sir Cloudesley Shovell, who lost several ships at sea in the Isles of Scilly with over 1,400 men on board. They were lost in stormy weather, unable to calculate their position. The British parliament’s reaction to this horrible loss of life was to create a Board of Longitude in the Longitude Act of 1714. They created a prize ranging from 10,000 to 20,000 pounds to discover a ‘practicable and useful’ way to determine longitude at sea.*

Born in Wolsingham, County Durham on May 13th, 1804, Janet’s brilliance was perceived early and she received a national scholarship to attend Queen Charlotte’s school in Ampthill, Bedfordshire. She married a George Taylor Jane, had eight children and lived her life near the Thames docks. By then she was an established author of nautical treatises and textbooks, and established her own Nautical Academy not far from the Tower of London. 104 Minories, in fact.

In 1834 Janet Taylor invented the Mariner’s Calculator, a device that enabled the finding ‘the true Time’,’the true Altitude’, ‘the true Azimuth’, ‘Latitude by double Latitudes and elapsed Time’, among many other applications. Sadly, after testing at sea, the instrument was determined to be too delicate for the ‘clumsy fingers of seamen’ noted to be like ‘sausages’ so it was not widely adopted. Still she received  gold medals of recognition for her contributions to the maritime community by the king of Prussia, the king of Holland and even by the Pope. After the death of her husband she put into dire financial straits, and was given a Civil List pension of £50 per year.

When I mentioned all of this to Guy Hunt, he was excited. It is very possible that the First Lady of Navigation had conducted her Nautical Academy on the site and it is equally possible that when we go to full excavation that we’ll find building foundations and rubbish dumps that could possibly be associated with the trade at the time. The thought is made even more tempting by a single artifact, unremarkable at the time–we found a pair of compass dividers on site.

So, on a day dedicated to women in technology, this post is devoted to the only woman in the 2,200 entries in The Mathematical Practitioners of Hanoverian England 1714-1840, Mrs. Janet Taylor. Happy Ada Lovelace day!

*This post heavily references John S. Croucher and Rosalind F. Croucher’s Mrs Janet Taylor’s ‘Mariner’s Caluclator’: assessment and reassessment in The British Journal for the History of Science, 44:4, 493-507. I understand that there is a longer book coming out by the Crouchers regarding Mrs. Janet Taylor, which I look forward to reading!

If I created a venn diagram of my interests, these photographs from Ofra Lapid would be a beautiful fit for the intersection of site depositional processes (ruined houses), dioramas, and photography. While these are more akin to papercraft than true dioramas, I love that they reference digitality–when I create a 3D reconstruction of a structure, I take photos such as these to create skins or textures for the buildings. This is obviously one step further, the creation of a 3D structure that is then printed out and reassembled as a small model.

I’d love to make papercraft models of some of the buildings that I have recreated, but most of the software is PC-only. I could work around it, but it is definitely in the “TO DO…LATER” category. 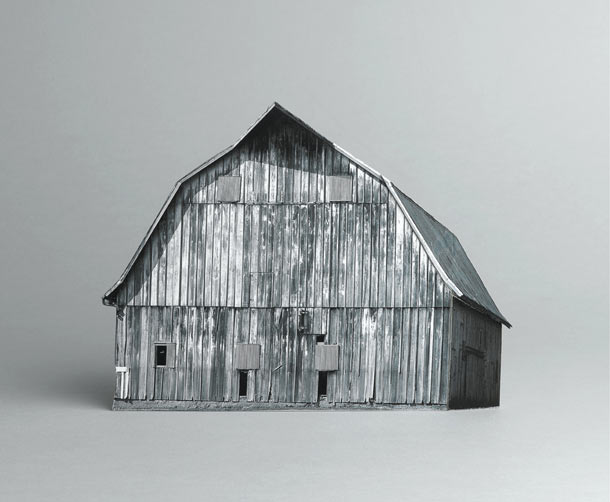