A gust of wind whipped the context sheet from under my hand, leaving a long, thin, bloody line across the back of my thumb. I sighed, but it only added to the current tally of open wounds on my hands–four. Most are small, little nicks on my knuckles from troweling over rocks and happily there aren’t any opened blisters. I’ve had a particularly stubborn cut on the back of my other thumb that refuses to heal–I cleaned and bandaged it immediately, but it seems like no matter what I do I have a dirty, shredded rag instead of a bandage at the end of the day and a bright red line of infection around the wound.

My knuckles are already thick, but they seize a bit sometimes, especially my right forefinger, my “troweling finger”, which has an awkward bend common to archaeologists. One of my friends here told me that he wakes sometimes with his fingers hooked and has to bend them back into place. My knees creak and pop and I have bruises along my shins from kneeling on rocks–we don’t have desks on site and we often have to crouch on our knees over our paperwork to protected from the wind, or rain, or sun.

Sometimes when I kneel, troweling across the 40/60 salty, silty sand I think I can actually feel the ground leeching the water from my body–the heels of my palms and my fingertips are chafed, dry and callused. Last time I was in Doha I went to a fancy shopping center that carried fine silk and linen dresses–my fingers rasped and caught as I touched them. The haptics of class, I suppose.

Most academic archaeologists have never spent more than a month or two at a time digging, indeed many professional archaeologists are the same–who can pay for long excavation seasons in this economy anyway? We aren’t doing the hardest excavation in archaeology; trowels in sand cannot compare to shovels in clay, even on the windiest of days. Working with your hands is a fairly romantic notion these days, and it’s one of the things I love about archaeology, dirty bandages and all.

But we know we can’t do it forever. The knees go. The back goes. Problems with eyes, hands, even the skin can remove us from our profession. I had a few pre-cancerous lesions burnt off of my face a couple of years ago, accompanied by a stern warning by the dermatologist to stay out of the sun as much as possible. And I’m certainly one of the lucky ones. I know at least a dozen people who have had to change careers after a physical malady.

The visual in archaeology is often emphasized in academic circles, with occasional nods toward the other senses adding to “a sense of place.” We awaken our senses, what does it feel/taste/smell like to be on an archaeological project? How can we share that with others? I’m writing about some of that in my dissertation, but now “being in the field” is becoming so normal that it is hard to remember to share. Sometimes I’d rather deaden my senses, something that can be difficult in a country where alcohol is mostly illegal. I wonder if reflexivity is easier when performing a rarified, vacation-like excavation after a year of teaching. The lived experience of archaeological investigation and engagement with place can be exhausting.

It’s the weekend–I think I’ll go back to bed.

Between digging up wedges of wind-blown sand and anhydrite stub walls I’ve been thinking about archaeology and reflexivity quite a bit lately–what we are allowed to do and think while we are constructing a record of the past. My daily experience of site is fairly rote; I clean the context, photograph, draw, level, record, dig, sample, record, sort artifacts, write 1000 labels, rinse, repeat. A criticism of single context recording is that it is deadening to creativity in interpretation, but I think that is a critique more of the application of the methodology than the methodology itself.

Though I find many moments in the day where I could be creative, where I could take a moment to take an unnecessary but beautiful photograph, where I could try to chat with my workmen about their opinions of the site, think about the architectural phasing and recreate the paths around and in-between the buildings that people could have taken, I often retreat back into single context.

Among professional archaeologists it is often frowned upon to step outside of these lines. Most people don’t really want to talk about their day job while they aren’t on the clock–it’s an unwelcome intrusion into relaxation time. It can be a hard balance while on an archaeological excavation–sometimes you are just exhausted and talking about stratigraphy or methodology can be dry dinnertime conversation.

Still, I consider “being game” an essential part of being an exceptional (or at least interesting) archaeologist. Want to find a nearby clay source to reconstruct an earth oven to see how it works? Okay. Want to find the only soccer field with grass within 100km and play on it until the evening call to prayer? Okay.

By “being game” I mean being open to experiences of all kinds, and importantly, letting this allow you to see your archaeology in new and interesting ways. It is easy to become hide-bound and it is a truism on sites that archaeologists don’t like change–they don’t like new people, different accommodations, new rules, but it is important to stay open and excited about archaeology. And life.

I think that there is a balance in archaeology, as with most things. Staying passionate and invested in your profession while living life as an ongoing adventure can be tricky, to say the least. But it’s a worthwhile cause, if only to maintain some semblance of sanity, right?

I stepped into the auditorium. The space seemed cavernous–high ceilings, hundreds of white chairs, and a single podium up front, a podium that was not nearly big enough to hide behind. I took a deep breath and stepped inside.

The room was empty, but felt safe. It was my first professional meeting–the Society for American Archaeology in 2004 in Montreal and I was overwhelmed. There were thousands of archaeologists and they all seemed to know each other. I had just been working long days on a big site in Kerrville, Texas, and felt grubby and callused–very removed from the high-falutin’ academic talk that surrounded me.

I walked up to the podium in the empty room and did what my mother told me to do: “get into the room early and practice giving your talk at least twice.” The paper was printed in big font, double spaced, a few corrections here and there. In my own scrawled handwriting across the top–SMILE. I lowered the microphone to my height, wincing at the screeching sounds that it made, and started to speak.

I was about half-way through when the door way at the back of the auditorium cracked open, then closed shut, and then, more slowly, opened again. I couldn’t really see who it was, but that didn’t matter; I didn’t know anyone anyway. As soon as she–I could see that it was an older woman at this point, made it about half-way down the aisle, I apologized and said that I was just practicing. She said it was fine and made her way to the front row. I was nervous, but if I couldn’t give my talk to one woman, how could I give it to a whole audience?

While I droned on, she settled into her seat and pulled out her own sheaf of papers. She was writing rapidly, but not frantically, crossing out some words and re-writing others. I tried to ignore her as I hurried on with my talk.

At some point I noticed her pen stop, then drop, and she looked up from her paper. I was speaking about feminist lineages in archaeology; how as an undergraduate I benefitted from strong female leaders in archaeology and their students becoming teachers of a new generation (and supermajority) of women in the field. And she, this woman in the first row, was listening.

I finished and she stood up and clapped loudly, congratulating me for speaking so clearly and well. We chatted for a little while, about my paper topic, and she gave me further advice about conference presentations and academia. I honestly don’t remember most of the rest of the session–I was still very nervous–but to this day I remember her kindness, her encouragement, and her generosity. She didn’t have to mentor me, she could have kept working on her paper, but she took a moment for a nervous, nobody undergraduate. I glanced at her name tag, but it meant nothing to me at the time…until I googled her later.

Please read Rosemary Joyce’s post, which gives you a better perspective on just how amazing Elizabeth Brumfiel was:

Liz Brumfiel will always be remembered

Ryan Anderson’s wonderful Anthropologies project is on its tenth edition:

Beyond Words (the visual issue)

I wrote my contribution in India, in longhand, then typed it out in an internet cafe. First fully analog to digital blog entry for me, check out one of the 4(!)pages: 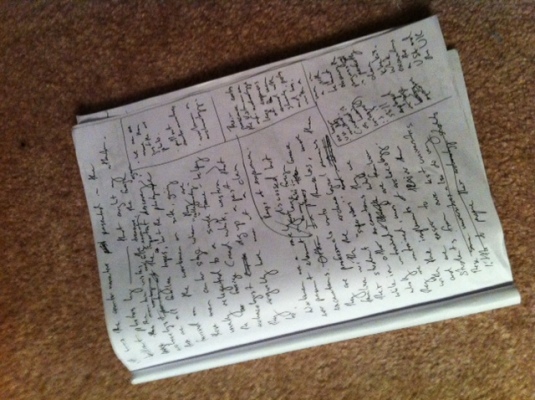 One of my favorite academics (and people) Dr. Sara Perry also has a contribution to this edition, titled: Fluid Fields: The (Unspoken) Intersections of Visual Anthropology and Archaeology.

Here’s an excerpt of my entry, for the full length click through to Anthropologies.

The Workmen of Mes Aynak

Workmen are a rarely discussed but often present element in large excavations performed outside the United States and the United Kingdom. Their presence evokes the Victorian era of archaeology; large expanses of oddly-dressed men working with picks and shovels, directed by a man in a pith helmet and perfectly clean khakis. While this is becoming rare (indeed this method is heavily critiqued) it is still employed in large excavations. Some governments require foreign excavations to employ local people, and in sites in Greece, workmen are professionals unto themselves, often more familiar with the archaeological remains than their student “supervisors.” In still other excavations, workmen are not allowed to excavate the “real” archaeology, but are employed to move our already-excavated spoil or to lift sandbags. While there is a wide range of experience and interaction between foreign excavations and local people available, archaeologists receive no training in interpersonal management or customs. Yet we form relationships with these workmen and learn from each other. They become our friends and workmates but they still occupy the margins in archaeology–excluded in publications, never cited, and rarely thanked.