There’s a minor tussle going on over at Aardvarchaeology and Archaeological Haecceities over a public lecture at Linnaeus University in Sweden. The lecture is by Semir Osmanagich, a fringe “archaeologist” who claims to have found pyramids in Bosnia. I actually posted about this back in 2008 with photos of some of the nice geological sections that have been gouged into the hill:

When I saw the invite to the lecture “The Bosnian Valley of the Pyramids in Context,” I have to admit that I cringed–surely a university wouldn’t lend any credibility to this obvious hoax. In the comments over at Aardvarchaeology, Cornelius Holtorf explains, courtesy of Google Translate:

This should be an interesting talk–I’d very much like to see the lecture and the discussion afterwards. Osmanagich’s work is fascinating in this respect; how did he get so far with such an obvious hoax? Why is the idea of pyramids in Bosnia so compelling to so many people? I admire Dr. Holtorf’s work and would like to be as high-minded, inclusive and controversial as he is–I mean, why not discuss the implications of imaginary heritage when compared to actual cultural heritage? Sadly I think I would have a problem getting past Osmanagich’s wanton destruction of actual archaeological sites while bulldozering for imaginary architecture, and I hope someone at Linnaeus University takes him to task for that. A full rundown of the situation is available on wikipedia:

Oddly enough, an interesting parallel popped up on the Catalhoyuk facebook page–a handful of posts by Artūras Jazavita, projecting a “proportional grid” on many of the photographs of artifacts and architecture: 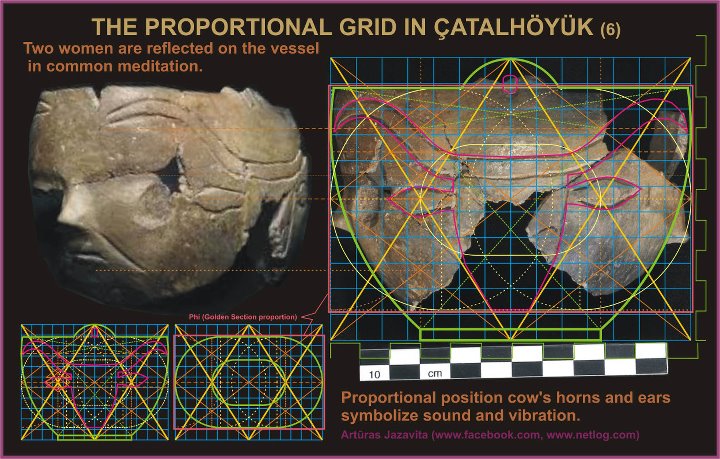 His proposition is that the Catalhoyuk “proportional grid” is the same as Gobekli Tepe, a claim that oddly echos some of the recent academic literature about Gobekli. By posting his photos on my blog, am I giving him undue credence? Or am I putting it into context, much like the invited lecture above? Should the Catalhoyuk Facebook page owner delete the posts? I actually find the inscribed photographs strangely beautiful, though completely imaginary in their claims:

By offering high-quality digital images to the public, there is a risk of our photographs being co-opted by pseudoscientists who use them to advance these specious claims. We could restrict access to the photographs, or not invite controversial speakers to our universities, but perhaps this would rob us of the chance to counter the claims, or even for us to draw inspiration from their imaginations. As I understand the situation, Dr. Holtorf wants to know why Osmanagich’s work is so compelling, and perhaps then try to refocus this public interest back to actual cultural heritage. Artūras’ images made me want to take out my drawing tablet and sketch on some archaeological photographs. Can we co-opt the co-opters? Can we steal back the imaginations of the public from the psuedoscientists?

8 thoughts on “Pseudoscience, Archaeology, and the Public”