I immediately regretted my decision to walk to the University of Sheffield. My hair whipped around my eyes and mouth and I had to keep dodging blowing garbage. The hurricane that had ripped up the east coast of the United States was making its presence known on the other side of the Atlantic. This was represented on the news by what looked like a giant invasion of white ghosts in a psychedelic, swirling arc across Ireland and Northern England. (Learning about how the English talk about the weather has been an education on its own–who’d’ve known that the forecast could be “white cloud,” “gray cloud,” or simply “dull.”)

I ran into the conference room for the Assembling Archaeology seminar late and windswept, but quickly found a seat at the back and settled in to hear Helen Wickstead speak about art and archaeology. She memorably spoke about some of the annoying aspects of conducting this “cross-disciplinary” research, in short, that the only relevant art within archaeology is illustration and depiction of antiquities; that art/archaeology is “self expression” and not research; most research of art/archaeology looks mostly at the boundaries between the two; finally, that art is primarily used to communicate with the public. I think it was this last point that riled up a certain Twittering audience member, but I think it was just a misunderstanding of terms and positioning.

Next, Bill Bevan and Bob Johnston presented separately the fantastic photographic work that Bill Bevan was doing as the Leverhulme visiting artist at the University of Bristol. His residency and the work that he produced definitively proved the value of such a program. It would have been amazing to be able to have an artist in residence in anthropology at UC Berkeley to collaborate with on projects. I asked my first annoying question–did he actually do any kind of content or semiotic analysis of the assemblage of photos that he had created during his time as an artist in residence. Sadly he had not. I’m not sure how useful it would be to analyze your own photos, but I found the big analysis of the photos taken over the years at Catalhoyuk extremely informative to my own photo practices. I really should publish that sometime. I also wanted to ask him nerd questions about his camera, editing process and whether or not he uses Creative Commons–judging by the image protection set up on his webpage, I’d guess not. I just wanted to look at your metadata! And maybe link to an image! Honest.

Paul Evans is another Leverhulme artist in residence, creating and interacting with bioarchaeology, in particular, bones that have been modified in some way. I highly recommend his blog, Osteography. His work ranges from very intense and gripping:

to a bit more lighthearted:

I was happy to see my friend Aaron Watson again, who has a finished version of his Stones From The Sky film, which combines digital photographs, video, and 3D animation seamlessly into a fantastic meditation on the stone axes and quarries of the Lake District.

Probably the most entertaining presentation of the day was Mark Antsee speaking about his work reflecting on the Stonehenge Cursus. He began by tagging the landscape (in non-permanent charcoals and chalk) with a line representation of the Cursus, then, influenced by the deep ties that the region has with the military, elaborated on this work by making flags and cow trough sarcophagi around the landscape.

I particularly liked that he framed his work as a provocation, a response to the provocation of the act of archaeology, particularly the act of digging in the landscape. Mark was able to reframe this monument, add a sense of disorientation to this well-known (though often overshadowed by its neighbor Stonehenge) monument. I loved that he managed this all while staying within the bounds of what you can feasibly do at historic monuments–I’ve often struggled with methods of inscribing landscape or indicating that there was interpretive material available without getting the park rangers and such angry with me. Anyway, he also made sure all of the seminar participants were similarly inscribed: 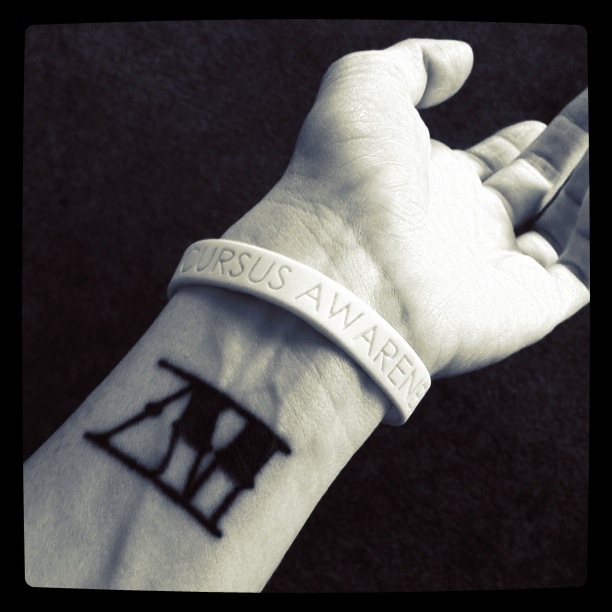 My very own Cursus Awareness bracelet!

Simon Callery presented the work he had done a decade ago wherein he lay down plaster directly on top of the excavated chalk ditches, creating a curvy, chalk-embedded representation of the site surface. He spoke about the long collaboration he had with the University of Oxford archaeologists and spoke at length about the true nature of this collaboration. He felt it was key that neither artists nor archaeologists “leaned” on the other’s work but rather explored the question, “what is it about questions that we ask do we share?” That is, what are archaeologists and artists interested in and how can we use that shared interest as a collaborative space.

ADDED – (sorry, I skipped a page in my notes)

Antonia Thomas presented another perspective as an archaeologist who made an incursion into an art gallery, presenting art and artifacts associated with excavations in Orkney. She took up residence in the art gallery, much like the artists who come and live with archaeologists in the field, and transformed that space into a more ambiguous blend of art and archaeology. Her reaction to the space of an art gallery is probably the same one I would have had–she recorded it in 1:20 on a sheet of permatrace. I probably would have phased it as well, or started peeling off the layers of paint in one of the corners to understand past installations.

The last presenter was Angela Piccini who showed her video work as she spoke about her experimental video work and using the camera as part of her research process. She is interested in working against the aesthetics of film and narrative to find the “anti-beauty” in place. I asked her how it was to work against narrative when digital editing tools enforce placing video clips on a timeline, etc. It was nice to be able to talk to another archaeologist who deals in film, and really made me want to delve into one of the several projects that I don’t have time for right now.

In all it was a good experience, especially in that I was able to see some folks that I’ve met over the years and check out the progression of their work in particular and of the dialog surrounding art and archaeology in general. I’m happy that we seem to be moving on from the same discussions (as noted by Wickstead) into a more productive space. I came away both inspired and motivated to continue my work in the art/archaeology/digital realm. One quick criticism is that while most of the speakers had a defined online presence, much of their work was either hard to find or annoying/hard to link. It is tempting to just leave these people and works out of the discussion.

Anyway, as Angela Piccini said, (and I paraphrase) “I hope that the relationship between art and archaeology continues in its grubby way, afraid of neither the banal nor the sublime.”

2 thoughts on “Assembling Archaeology in Sheffield”