This Fall we had the chance to teach a class about serious games using Okapi island as a base and we had four research apprentices working to improve the island.  As a result, we had some pretty amazing progress on the place.  As you can see from the image above, we have our entrance relocated to where the visitors entrance to the site is, along with the gate, the cafe, and the signage that you see as you are entering the actual site.  We are still fixing up the guard house and the experimental house, but I think that giving visitors a better sense of arrival adds to the island.

One of our apprentices designed some Neolithic clothing and tattoos, based on designs from John Swogger, Kathryn Killackey, and her own imagination. They incorporate designs and materials that we have evidence for from the archaeological record and were useful when we filmed our machinima. You can pick up your own set at the entrance to the site. 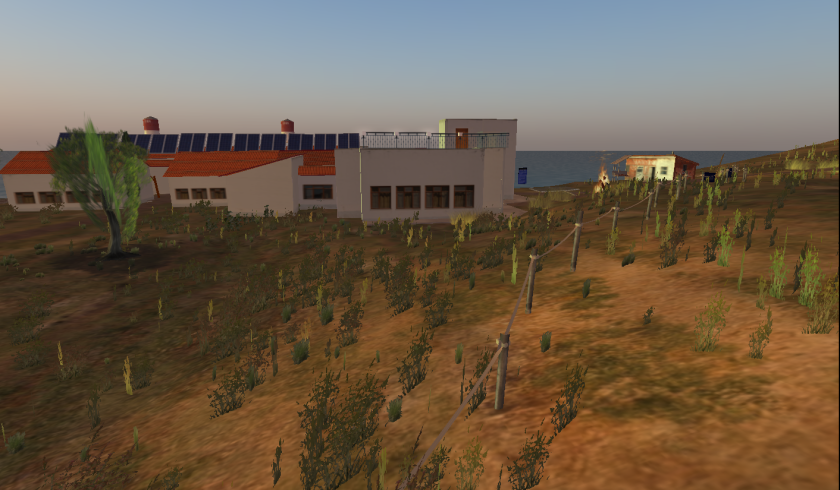 We were also able to get the dig house exterior in place, though work on the interior continues. Building the dig house was interesting, as I had never really paid attention to how odd the architecture is, and how all of the walls and rooms fit together.  I was able to request some last-minute photos from Jason Quinlan to add textures to the exterior, but I’m having a hard time finding good interior shots–always people in the way!  Building in Second Life still shows me that we lack a lot of the documentation necessary for 3D reconstructions. 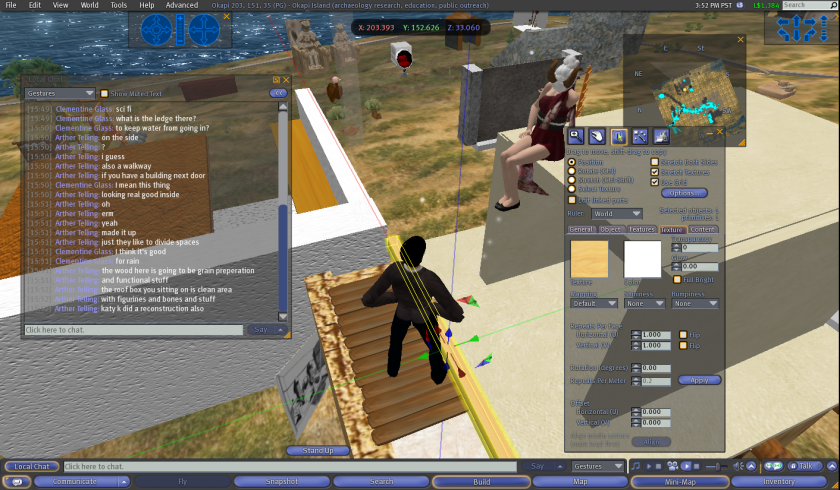 We also have been reconstructing B79 in the sandbox, and will hopefully finish in time to add it to the report on the building. It has been a collaborative building effort with Daniel Eddisford, and the discussions about architecture that we’ve had regarding the reconstruction have made us both reexamine our assumptions about mudbrick dwellings.

Our machinima should be finished in the next month, so watch out for that.  Later on in the Spring we will have our research apprentices continuing to work on the island, and hopefully have a “Grand Re-Opening” in May.

Oddly enough, we got some press coverage yesterday as well:

During the Visualisation in Archaeology closing discussion session we collectively struggled with methods for evaluating visual works by archaeologists as a means of legitimizing the work as an intellectual product on the same level as a journal article or book.  This is especially important for those of us who devote so much time to making videos and multimedia projects and do not get academically or professionally rewarded for this work.

The MLA has taken up a bit of this slack in publishing their wiki on the Evaluation of Digital Work, here:

This wiki is an ongoing project initiated by the MLA Committee on Information Technology (CIT) as a way for the academic community to develop, gather, and share materials about the evaluation of work in digital media for purposes of tenure and promotion. These materials were initially conceived, written, and hosted by Geoffrey Rockwell when he was a member of the CIT (2005-08). The wiki is now maintained as a collaborative project of the MLA and other interested parties, such as HASTAC (Humanities, Arts, Science and Technology Advanced Collaboratory).

It’s this kind of policy making that might bring a more thoughtful use of digital work in archaeology.  As part of a now-defunct journal, Critical Archaeology, I was to have a regular review column that would address these kinds of problems.  Internet Archaeology has a review section, so perhaps I should take my case there, but  I would still like to have a specialized venue to develop these criteria.  It is difficult finding archaeologists who are conversant enough in theory and practice (this especially!) in digital archaeology to be peer reviewers and there are so many projects out there that are using digital media in an uncritical, piecemeal fashion that it would be good to have to more generalizable standards.

Instead of a wiki, I’ve started a google wave to develop these standards.  Full disclosure: I’m still trying to find some kind of use for google wave.  Let me know if you’d like an invite.

My friend and fellow UC Berkeley grad Tom Sapienza made these “cover remixes” and I asked if I could share them on my blog. There is a heavy Berkeley representation among these, unsurprisingly.

The weather has turned chilly and I have returned to one of my favorite forms of structured procrastination–maintaining the Archaeology in Action group on Flickr.  Again, I had to weed out various travel photos, museum shots, and landscapes without explanation, but found a whole bunch of really good images that I had to share.

This is the photo that inspired the post.  Buzz Hoffman has been documenting the Hamline Methodist Church project and snapped this lovely image of a stained glass window from a church that was destroyed by fire in 1925. He’s been blogging about it at Old Dirt – New Thoughts.

My good friend John is finally back out in the field in Texas, digging squares and blogging about it.

Here is an archaeologist recording rock art in the desert in Morocco.  I love how the recording of rock art emulates the act of creating rock art.

And while we’re on the subject of art, this reconstruction really knocked me out.  I love the layers of interpretive material and illustration as work in progress. Easily one of the most interesting reconstructions I’ve ever seen.

Still, I love the sketchy reconstructions that Alistair uploads to his Flickr stream. Images like this make me wish that I didn’t spend so much time noodling behind a computer screen and sketched a bit more.