The Visualisation in Archaeology workshop was easily one of the best and most productive conferences I’ve ever attended.  Most of the attendees were presenting as well, and there was only a single session at any one time.  Megan Price’s paper on the Victorian lantern slides produced by H.M.J. Underhill was particularly fascinating, and I approached her to ask if she’d considered making a small documentary film on the subject.

Aaron Watson’s reconstructions and reimaginings of archaeological sites was also really fascinating–it’s unfortunate that he doesn’t have any of his moving images/videowork online as far as I can tell, because it was my favorite.  He juxtaposed pieces of his final report with more sensorial experiences of the landscape during his ViA presentation.

My paper was well received, despite some online shenanigans attempting to sabotage (!) my career.  I wish I had spent more time working on the slide show, but for some reason this paper took way longer to complete than usual.

I got straight off the plane and went to class, which was a little brutal, but we were having a feedback session on papers, and it was nice to come back to some really insightful and complimentary remarks from people whom I’m convinced are about 20x smarter than I am.

So, now, with a rough draft of a publication due on Nov. 1st, the Asian Art Museum video, and burning down Çatalhöyük…I don’t even have much time to breathe!

I bought a Flip video camera to check it out for potential use in outreach and more cheap, on-the-fly video recording.  I like how small the thing is and it is really easy to use, but I think one of the most interesting aspects of it is the cell phone-like morphology of the thing.  People act very differently when they have video cameras pointed at them, and this (so far) seems to be less true with the Flip camera.  I like that it promotes more casual recording and it seems more resilient then most video cameras–perfect for on site.

One of the steep downsides is the gui that comes with it.  I played with “editing” inside of it and uploading videos with it, and almost immediately became frustrated with how obtuse it was.  I ended up importing the .avi files that it creates into Final Cut Pro, and editing them with my old, familiar tools.  The video quality isn’t great, but it’s better than most cell phone and digital camera video.  Jason, the site photographer at Catal, was playing with one of these over the summer, but I haven’t seen what he’s shot with it yet, so I can’t really compare.

I shot the above video while driving with Ruth to the Presidio, sped it up, threw a couple of transitions in and a snippet from Broadcast’s Poem of a Dead Song, just for kicks.  It took about 10 minutes, including rendering time.  Not too shabby.

The video quality on flickr leaves something to be desired.  I’m still trying to find the magic encoding/quality/upload computation.

If you’re in the Yay area, and are so inclined, join me at the Presidio Officers’ Club tonight at 7pm, where we celebrate Archaeology Month in California with a presentation of short “indie” films by archaeologists. I’ll be presenting my first short film, “Skeuomorphs.”

Curious to learn more about local archaeology and archaeologists? This evening will feature a line-up of short films by Bay Area archaeology students and professionals who have conducted research at sites throughout California and the world. Filmmakers will discuss their projects and the challenges of presenting an unfiltered view of the past. We invite you to join us for an evening of discovery.

Remember Me, but Ah! Forget My Fate – Ruth Tringham, University of California, Berkeley

A short clip from a longer video that we’re making for the San Francisco Asian Art museum. It’s the first time I’ve shot in HD, and it’s producing some problems between Final Cut Pro versions, but I’m struggling along.

Back in 2006 when news of newly discovered pyramids was reported in Bosnia, I remember checking out the tiny photograph of the angular, foliage covered hills, then shrugging my shoulders and moving on.  It seems that amateur archaeologists have continued the investigation of these hills, and have posted the results on Flickr.

They are really lovely photographs of more (pseudo)archaeologist-made archaeology–that is, naturally occurring geological formations dug in such a way to suggest “real” archaeological remains.  The thing is, I am also a geology nerd (if you couldn’t tell by my photographs of the Giant’s Causeway in Ireland) and while I deplore the needless destruction of the sandstone layers of an ancient lake and the later actual archaeological sites on top of the formation, it’s pretty neat to see the layers in section.

If you’re so inclined, check out what other archaeologists had to say about the pyramids, or check out the edit log from the wikipedia entry–it’s pretty instructive from a cultural heritage/knowledge construction point of view. 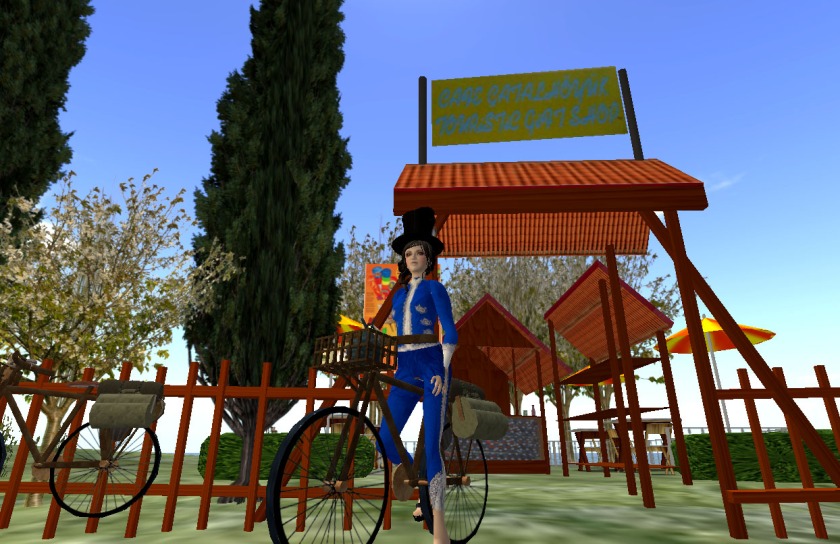 As previously mentioned, while I’m not writing, I’ve been working on OKAPI island in Second Life.  I wanted an area where we could package and give away textures from our upcoming events so that people could recreate any part of Çatalhöyük in their own Second Life reconstructions.  Naturally, I chose to recreate Sadrettin’s on-site cafe, where excavators (and brave lab people!) go for an ice cream during the break between excavation and paperwork.  Unfortunately I still haven’t been able to create an adequate ice cream freezer, and the plants are off, but…well, it’s Second Life.

If only the ocean were really that close to the site!  Here’s a shot of the cafe taken by Mia Ridge (of Open Objects fame) for comparison:

Come and check it out, if you’re so inclined:

At the beginning of last summer I managed to get a working geospatial/flickr/archaeology hack for embedding archaeological information in the landscape with the iphone.  I posted a short how-to on the Remixing El Presidio blog, here.  Since then, I’ve kept an eye on geolocative technology, but it’s mostly taken a back seat to my work in archaeological narrative and visual representation if only because that’s what I’m writing about for my dissertation at this point.  With the release of the iPhone G3 with built-in GPS and iPhone applications being developed, geolocation has once again surfaced in the form of Flickup, an application that automatically uploads photos that you take with your phone to Flickr, with geotag intact.

There are a few snags with the program–with older iPhones, you have to reload google maps so that it will have the proper geotagging information before you take any photos.  The photo above was taken at the Berkeley post office, but was auto-located in the “French Quarter” in San Francisco.  I don’t know if this is fixed with the G3 phones, but if someone has one to loan me, I will test it thoroughly, I promise.

This is a step toward (cheap) cameras that will record a timestamp and spatial data, making it easier for people who come along after the excavation has closed to locate archaeological information in place.  Another development that I’m keeping track of is Geode, the Firefox plugin that allows websites to provide information tailored to the user’s location.  In theory, archaeologists could develop a website in the same vein as Yelp, which provides recommendations and reviews of local businesses, but instead would allow a user to view local archaeological/historical images and information.  Ideally this website would be publically funded and would accept submissions from projects and people from around the world.  That reminds me to work on my HASTAC application, boo.

Hm, so it’s a cascade of bones, flowing down a staircase.  Some strange Mesoamerican thing?  Wait, the photo credits say:

Ice age?  Okay, so pre-architecture, probably megafaunal…yes, those are pedestalled bones.  Were they once in a pit or were they in a pile?  Who knows, because now they’re on a staircase made by archaeologists.

Here’s a shot of a trench in Alaska, on Kotzebue Sound from Travis S., dug to test the impact of road improvement on the archaeological record.  They found faunal remains during testing, including a seal femur and bird bones.  Travis S. has heavily annotated his photographs with his interpretations, making them really interesting and informative.

Another chilly-looking excavation in Hólar in Hjaltadalur, a small community in northern Iceland.  From Siggidori’s set comments: “Hólar was founded as a diocese in 1106 by bishop Jón Ögmundsson and soon became one of Iceland’s two main centers of learning. Hólar played an important part in the medieval politics of Iceland, and was the seat of Guðmundur Arason in his struggle with Icelandic chieftains during the time of the commonwealth. Under Jón Arason Hólar was the last remaining stronghold of Catholicism in Iceland during the Reformation. The best known Lutheran bishop of Hólar was Guðbrandur Þorláksson.”

From the Heritage Underwater Maritime Archaeology project in Gotland, Sweden on a ship that sank in 1566.  This ship features an unusually long and early type of wrought iron cannon, one that could be used on either land or at sea.  I’m always impressed by the equipment and skills of underwater archaeologists who have to deal with a whole additional array of problems in archaeology.

And, lastly, keeping it real with wet screening in the rain in Bretagne, France.  Murmel.jones and crew were investigating an Iron Age site in 2005.  Looks miserable. 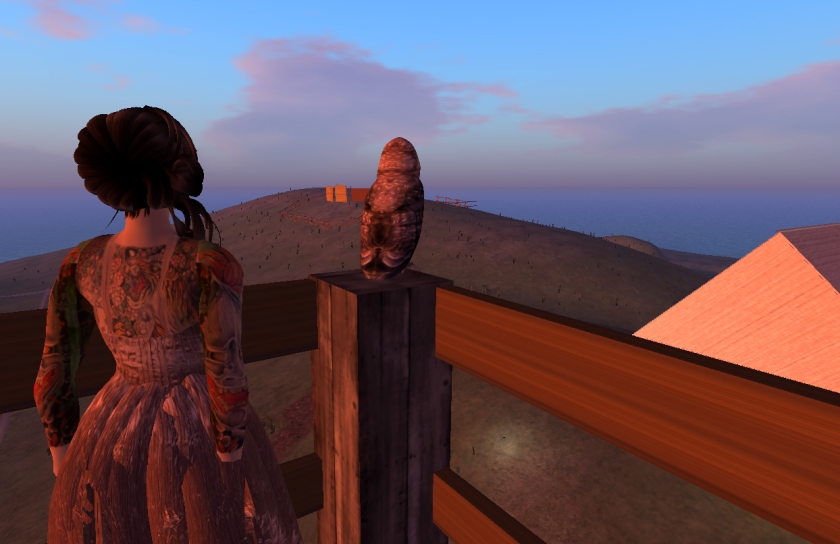 I’ve been working on the OKAPI island in Second Life pretty hard recently, with the addition of Sadrettin’s cafe, the water tower complete with little owl, and some cosmetic fixes that I’ve been meaning to do for a while now.  I’m also happy to report that Karl Harrison will be helping us BURN Çatalhöyük DOWN at the end of the semester.  Good stuff.

More to the point though, is that there needs to be Efes in Second Life, as it is an integral part of the Çatalhöyük experience (for better or worse!).  I was looking around for good photos of the beer labels and found these masterful constructions:

There’s a deep and obvious kinship here, one that hits me right at home:

Because Art is a cowboy hat, made out of a beer carton, according to the headline of the Austin American-Statesman, flagship newspaper of the capital of Texas.

(this image is downright stolen from my brilliant friend Joolie, who has much more to say on the topic)