A few days ago I came across some images posted by one of the right-wing vigilante border patrol groups of the trash that is left behind by people crossing the US/Mexico border.  This is just one of the many perceived affronts by what many people consider an invading force–their own ancestry be damned.

When I was still working as a contract archaeologist, I was on a couple of surveys near the border in Laredo and Brownsville, and I found a few of these items, left behind by people on the run, trying to figure out what they actually need and what could be discarded.  Toothbrushes.  Toys.  Socks.  Bibles.

Now that our esteemed government is planning to build a folly of a wall along the border, there is undoubtedly archaeological work associated with the project.  I’ve been talking about doing some contemporary archaeology at the border for a long time now, a project that would probably not get past the Human Subjects Review process, in that it would endanger illegal immigrants by making their paths known to would-be border-enforcers.  But, still–understanding the process of crossing the border better could help us to know what people need for the journey, and hopefully fewer of the immigrants would die in the process. 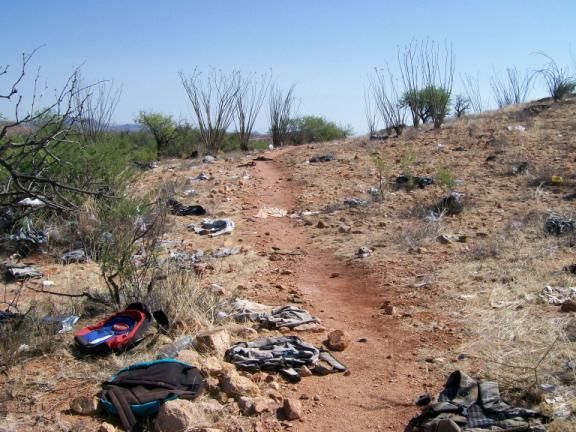 I was holding off on posting about it, but these images just broke Fox News where they are titled, “ALIEN TRASH” together with a sensationalist story about this trash costing taxpayers “millions” to clean up.  My hope, albeit a faint one, is that this story ultimately produces empathy in people instead of perceiving it, as it is stated in the news story as a “national disaster of our cherished outdoor areas.”  What do you carry on and what do you leave behind?